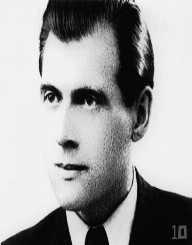 Josef Mengele was a notorious Nazi doctor who practiced at Auschwitz concentration camp during World War II. He was part of the team of doctors who chose Jewish prisoners to be gassed or executed, and who decided which prisoners would live. He was also known for his cruel and inhumane experiments that he did on the prisoners especially children. After leaving the camp, he fled to South America and evaded capture until his death.

Josef Mengele was born to Karl and Walburga Mengele in Bavaria, Germany, and was the oldest of three children (all boys). The family was wealthy enough as his father was the owner of a company that produced farm machinery. However, his mother was unemployed and brought the boys up while their father was at work. She was a firm woman who believed in raising respectful and obedient children. She has often been thought of as coldhearted.

Throughout his school career, young Josef Mengele was a good student and was often praised by strict teachers for his excellent behavior and efforts. He graduated from the Gunzburg gymnasium, which is a high school, in 1930. He then took and passed an entrance exam and began attending the University of Munich. His primary field of study was medicine.

Mengele was inspired and heavily influenced by Dr. Ernst Rudin, a man who believed that some lives weren’t worth living and that they should be removed from the population with the help of doctors. He also developed a keen interest in eugenics, which is the study of genetics and what makes them create deformities and imperfections in humans.

After five years of attendance at the university, Josef Mengele was awarded a Ph.D. for his thesis called “Racial Morphological Research on the Lower Jaw Section of Four Racial Groups.”  In 1936, he passed a state medical exam and became a licensed doctor. He began practicing under Professor Otmar Freiherr von Verschuer, who is also believed to have influenced Mengele’s sadistic way of thinking.

In 1937, Josef Mengele joined the Nazi party. Throughout 1938, he received basic training and was then called for service in the German armed forces in June of 1940.  He volunteered for medical services in the combat arm of the SS. Here, he served as the second lieutenant until November of 1940.  He was then sent to the SS Race and Resettlement Main Office, where he was tasked with evaluating the candidates for Germanisation.

In 1941, Josef Mengele was reassigned and posted in Ukraine, and in 1942 he joined the 5th SS Panzer Division Wiking where he served as a medical office. Here, he was wounded in action after saving two German soldiers. After this, he was assessed and deemed unfit to perform any further work. He was then sent to the Race and Resettlement Office in Berlin and picked up contact with von Verschuer. Auschwitz

In 1943, Josef Mengele was assigned to Auschwitz concentration camp. He was promoted to chief physician of the Romani family camp. It was late in 1941 that Hitler decided that Jews were to be eradicated. Mengele was part of the team of men that determined who was fit for the camps, and who was to be gassed or executed. He was particularly interested in finding sets of twins that he could use for experimentation. His other comrades did not enjoy this duty;  Mengele enjoyed his work.

Josef Mengele began to experiment on sick inmates and children, starting with experimentation on inmates who were ill with Noma.
From here, it escalated, and Mengele became known for his experiments and cruel actions. He continued to focus on twins, but also began to gather people with physical deformities, dwarfs, and people with two different eye colors.

Just before the Red Army liberated the camp, Josef Mengele fled to South America to avoid being persecuted for his experiments an unethical behavior. In South America, he jumped from job to job to make a living. He lived in South America until his death.

On the 28th of July 1939, Josef Mengele married Irene Schönbein. In 1944, their only son, Rolf, was born. The couple divorced after nine years of marriage. In 1958, Mengele married his brother Karl’s widow, Martha.

There is little documentation about what Mengele did in his spare time. It is safe to assume, however, that he educated himself through various books and communication with other doctors, as in his early life, he was very academic.