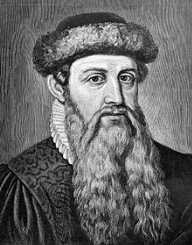 A man of diverse talents and skills, Johannes Gutenberg, was a noble publisher, goldsmith, and printer. He’s famously recalled for cropping up with a movable type printing machine. He also came up with a complete foundation that allowed him to print the Bible. It was a massive success not only for his purpose but also for the modern world. In between, he invented an ink that preserved its texture in the books for it to last longer. Gutenberg was close to perfection so to say, he was one of the favored and beyond.

Johannes Gutenberg was presumably born around 1398 in Mains, Germany. He was born to Elyse Wyrich and Gensfleisch. Johannes had a comfortable life while growing up, thanks to his wealthy father.

According to sources, his family went to live in France, Strasbourg. It is very likely that he attended the University of Erfurt. His father met his end in 1419. It was there that Johannes started to work as a goldsmith where he learned trading skills. While at work, Johannes used his precious time well by learning various printing skills.

Moving type printing idea was born in 1440 where Gutenberg introduced unique concepts of printing. It is not known what he did for four years. He appeared in 1450 where he opened a printing press.

The very first written word by the printing machine was a poem that was written in German. He saved some money to expand his workshop in 1452. The following year, he opted to try printing the Bible that brought nothing else than good fortune.

It wasn’t that long that Johannes set another press where he published textbooks in different languages. He also printed Roman books. However, in 1456, he was sued by a German first printer, Johann Fust for unauthorized use of his money. The case was taken to court where he lost miserably. It is believed that he incurred a huge loss of money due to the printing projects of the Bibles. The workshop was later taken by none other than Johann himself.

After all the battle that Johannes fought for his printing workshop with no success, he was honored with the title called Hofmann. Gutenberg’s health started to deteriorate at his median age where he became blind. He died on February 3, 1468. He was interred at Franciscan Church located in Mainz.