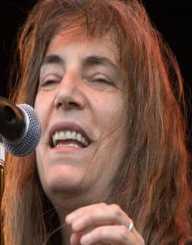 Patricia Lee Smith, commonly known as Patti Smith is an American singer, writer, and visual artist. She became a hugely influential figure in the New York City punk rock scene, following the release of her debut album, “Horses” in 1975.

Born on 30, December 1946 in Chicago, Patti Smith was the eldest of four children. Her mother, Beverly Smith, was a waitress while Grant Smith, the father, worked as a machinist at a Honeywell plant. When she was four years old, her family relocated to Philadelphia before moving to Woodbury, New Jersey six years later. In her childhood years, she spent days in her bed due to frequent illnesses. In this period, her only sources of enjoyment were records, books, and her imagination.

She was shy and mostly had a tomboyish attitude. She preferred playing with her male friends until her high school art teacher told her the relevance of feminine aspects. At 20 years, she got pregnant but mulling over the difficulties accompanying child-bearing, she decided to surrender the baby for adoption.

In 1964, Patti Smith graduated from Deptford Township High School and got a job at a toy factory. A gruesome experience at this factory formed the basis of her first single, ”Piss Factory.” Keen to become a high school art teacher, she enrolled at Glassboro State Teachers College. Unfortunately, she dropped out of college thanks to her poor academic performance. She moved to New York in 1967, aspiring to fulfil her dream of being an artist. While in New York, she landed a job at a Manhattan bookstore.

While working at the bookstore, Patti Smith met Robert Mapplethorpe, a young artist, and photographer. In her book, “Just Kids,” she refers to Mapplethorpe as “the artist of my life” and considers him as one of the most important people in her life. In the 1970s, she chose performance poetry as her favorite artistic medium. Her first public reading came on 10 Feb 1971 at St. Mark’s church in Bowery. It was this reading that led to her recognition as one of the upcoming talents in the New York arts circle.

Keen to raise her profile, she co-authored and co-starred with Sam Shepard in his semi-autobiography play, “Cowboy Mouth” the same year.1972 saw her concentrate on writing with her two publications, Seventh Heaven and Early Morning coming the same year while Witt was published a year later. She also contributed for magazines such as Creem and Rolling Stone.

She managed to form her band, The Patti Smith Group in 1974. She recorded her first single, the “Piss Factory “which had a massive following and received praise from many people. The following year, she landed a record deal with Arista Records and released her debut album, “Horses.”

Her two singles, “Gloria” and “Land of Thousand Dances” constituted the album. The album was popular among the music critics. The second album, “Radio Ethiopia,” was released in 1976 but it is the third album, “Easter” in 1978 which gave the group a commercial breakthrough.

Patti Smith's fourth album, Wave, was a disappointment to the group as opposed to its predecessors. By the time of its release, Patti was deeply in love with MCS guitarist Fred Smith. In 1980, they married, and Mrs. Smith vanished from the public scene for the next 17 years. Rumours circulated that she was a drug addict while others claimed her new lover Fred did not let her tour and perform.

However, she had switched focus to her domestic life and taking care of their two children, Jackson and Jesse. In 1988, she collaborated with her husband to release an album,” Dream of Life” but this too was a commercial disappointment despite including “People Have the Power," one of Smith’s most adored singles.

Patti Smith rekindled her music career in 1994 after her husband’s death. Her comeback was marked by the album “Gone Again,” which featured the singles “summer cannibals” and “wicked messenger.” From the time of her comeback up to date, she has managed to rock the music waves with albums such as Peace and Noise (1997), Gung Ho (2000) and Trampin (2004).

These albums have all received praises widely. Her latest album “Banga,” was released in 2012. Just like most of her post-comeback albums, it also got a lukewarm reception with many people reveling at her style of mixing poetry with the rock.

Patti Smith has indeed been a source of inspiration to many artists, both the established and upcoming. For instance, Michael Stipe reckons that he was motivated to start his band by listening to her music. Other artists who have openly spoken about Smith’s influence on their careers include Shirley Manson, KT Tunstall, Courtney Love, Madonna, and many others. She is indeed the original punk poet.

Patti Smith was awarded the French decontin of Commander of the Order des Arts et Lettres by the Ministry of Culture in 2005. Later, the same year, Rockgirl Magazine presented her with the Woman of Valor award. On 17, May 2010, Pratt Institute gave her the Honorary Doctorate in Fine Arts. The same year saw her memoir; “Just Kids” won the National Book Awards. It never stopped there as in 2013 she received yet another award, the Katharine Hepburn Award from Bryn Mawr College.

She may be in her 60s now but Smith’s style is still outstanding, and her passion for music and art is not ending any time soon. She is currently working on a crime novel based in London and Gothenburg.