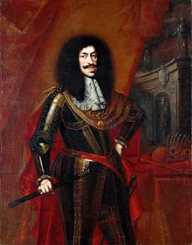 Leopold I was the king of Hungary, Austria, Croatia, Bohemia, and Holy Roman Emperor from 1865 to 1705.

Leopold I was born on June 9, 1640, as Prince Leopold in Vienna, in today’s Austria. He was the second born son of Ferdinand III, the Holy Roman Emperor and his first wife Maria Anna of Spain. His elder brother and heir to the throne was Ferdinand IV. Leopold was schooled at home with royal Jesuit tutors in arts and science. He mastered the classical languages of Latin, Italian, French, and Spanish. For some reason, he developed a personal dislike for the French language during his schooling years. He later banned the language from being articulated in the royal court. Leopold also mastered sciences and astronomical subjects.

He studied the tenets of the Catholic faith and became a staunch faithful. With a strong Jesuit upbringing, Leopold formed a solid conviction of intolerance against other Christian denominations in dispute with the Roman Catholic Church. His views on religion influenced his political decisions in his later reign as king and Holy Roman Emperor.


Ascending to the Throne

In July 1654, Prince Ferdinand of Austro-Hungarian kingdom died. Leopold became the eldest son and heir apparent to the throne. As the crown prince, he received the Austrian delegation which came visiting in 1655. The Austrians accepted him as their king. The Bohemians followed suit in 1656. In 1657, Ferdinand III, king of the Austro-Hungarian kingdom and Holy Roman Emperor died. The Holy Roman Empire was subjected to another voting cycle to elect the emperor. King Leopold I was embroiled in a bitter struggle to succeed his father against strong opposition from the French king and nobles. In 1658, the electoral council elected Leopold I and crowned him as the Holy Roman Emperor.

He entered into a series of political marriages with perceived strong allies to consolidate his base against the perceived French opposing threat. In 1666, he married his first wife Margarita Theresa of Spain. He married his second wife Claudia Felicitas of Austrian Habsburgs in 1673, after the death of Margarita Theresa. When Claudia died, he married his third wife Eleonore from Palatinate-Neuburg in 1676. Leopold I had 10 children with his third wife. Two of his children grew up to become emperors.

As the Holy Roman emperor, he embarked to secure his empire from the advancing Muslim threat of the Ottoman Turks in the east. In 1683, the Turks laid siege on the city of Vienna. Leopold I moved his family and the royal court to Nassau. When the imperial army arrived, the Turks gradually retreated and were eventually defeated by the army led by Prince Eugene of Savoy in 1696. Fearing an onslaught from the Roman Empire, the Turks agreed to a teary and relinquished their claim to all Hungarian soil. The agreement became the 1699 Treaty of Carlowitz.

When the Turks finally left, the Hungarian nobility dominated by the Protestant Calvinist revolted against the control of the Roman Catholic administration from Habsburg. Leopold I pacified the revolt executing the leaders of the revolt. He dealt with constant sporadic revolts in the Hungarian kingdom for the rest of his reign as emperor.

Leopold used shrewd diplomacy to pacify any territorial battles with the big protestant neighbors of England and the Dutch. This diplomatic arrangement sidelined France from any power battles in Europe. Leopold decided to deal with France decisively despite it being a Catholic kingdom. He waged a serious military campaign against Paris. The French repulsed the Roman army and forced a diplomatic ceasefire. In the terms dictated by France, Leopold surrendered the whole of Strasbourg region to France. The region was officially annexed back to France. Leopold faced bitter condemnation within his royal court for the decision. The 1697 treaty was later known as the Treaty of Rijswijk.

Despite his great zeal to military conquest of foreign lands, Leopold I miscalculated his domestic politics. He made several misguided appointments in his administration executives and foreign envoys. Most of his friends engineered the appointment of their friends to powerful positions in the empire. His imperial government depended on the financial support of the affiliate kingdoms. In his late years, he became more interested in the security and future stability of the Austro-Habsburg kingdom. He concentrated on the empowering of the Austrian kingdom and the Habsburg dynasty to withstand any aggression from the major European powers.

King Louis XIV of France took advantage of Leopold’s laxity to invade and conquer Spain in 1700. Spanish King Charles II died without a son. The French king engineered his grandson to ascend to the throne. Leopold lost a major ally kingdom to France. He resolved to liberate the Spanish crown by the military.

Leopold I died on May 5 1705 in Vienna, present-day Austria. He was buried in the royal burial site in Vienna.

Leopold I accidentally ascended to the throne without prior preparation as the crown prince. He displayed immaturity in his daily duties as king and emperor. Despite his shortfalls, he strengthened Austria to become a major European power. He created learning centers for the cultivation of the Austrian cultural heritage in the ordinary citizens. His love for arts contributed to the cultural revolution in the Austrian and Habsburg dynasties after him.