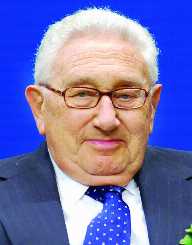 Henry Kissinger is a politician and diplomat best known for his work during the 1970s.  The Noble Prize winner originally from Germany was influential during the Vietnam War era.

Henry Kissinger was born on May 27, 1923, in Fürth, Germany.  His name at birth was Heinz Alfred Kissinger.  As a child, Henry Kissinger enjoyed playing soccer.

His parents Louis and Paula Kissinger relocated the family to the United States in 1938 to escape Nazi persecution.  While in the Army, Henry Kissinger became a naturalized citizen at the age of 20.

When Henry Kissinger returned to the United States after his service, he attended Harvard College where he graduated with honors in political science in 1950.  In 1951, he earned his MA from Harvard University. The next year Henry Kissinger was awarded his Ph.D. from the same school.  With his education complete, he stayed at Harvard as a professor in the Department of Government.

Henry Kissinger's first job was in a shave brush factory.  Henry Kissinger worked nights while attending high school.  As his service with the Army came to an end, Henry Kissinger was assigned to teach at the European Command Intelligence School at Camp King.

Henry Kissinger was later an educator at Harvard University after he finished his post-secondary education.

Henry Kissinger advised Nelson Rockefeller in his three attempts for the Republican president nomination. It was in 1968 when President Richard Nixon appointed Kissinger to the position of National Security Advisor.  In 1973, Nixon made Kissinger Secretary of State.  During his time advising President Nixon, Henry Kissinger worked to ease tension with the United States and the Soviet Union.  This included talks with China.

That same year, Henry Kissinger was awarded the 1973 Nobel Peace Prize with Le Duc Tho for their ceasefire and U.S. Withdrawal from Vietnam.  This award was controversial as the ceasefire did not remain. Tho did not accept the award, but Henry Kissinger did with a declaration to donate the prize money to charities that support children of fallen U.S. soldiers.  He later tried to return the medal.  Henry Kissinger remained active in many foreign conflicts and national tension during his years as Secretary of State under Presidents Nixon and Gerald Ford.

Henry Kissinger singer remained active after his years working in the White House.  He participated in policy groups, engaged in public speaking events, and published his written works.  Kissinger wrote many books on public policy.

His first book A World Restored Metternich, Castlereagh, and the Problems of Peace, 1812-22 was published in 1957.  Later books focused on American foreign policy, diplomacy, and even his transcripts of phone calls when they became declassified.

Henry Kissinger also resumed teaching at the university.  He was an instructor at Georgetown's Edmund Walsh School of Foreign Service.  In 1982 he founded Kissinger Associates consulting firm.  He was also on the board of directors for some companies.

Henry Kissinger remains involved in many aspects of foreign policy.  In 2016, he was considered a source of counsel for Presidential candidate Hillary Clinton.  Henry Kissinger also advised President-elect Donald Trump regarding the Crimean crisis.

Henry Kissinger married Ann Fleischer in 1949.  The couple had two children but divorced in 1964.  Kissinger then married Nancy Maginnes in 1974.  They are still married.

There are some countries where Henry Kissinger cannot travel because he may be charged with war crimes. This is due to his role as Secretary of State during Operation Condor and the bombing of Cambodia.