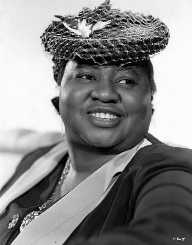 Hattie McDaniel was born on June 10, 1895, in Wichita, Kansas. Her parents were former slaves. Hattie was the youngest of 13 children in her family. Her father fought in the Civil War with the 122nd United States Colored Troops. Her mother was a singer and mostly sang religious music. The family moved to Colorado in 1900, settling in Denver. There Hattie attended the Denver East High School. Her brother Sam McDaniel and sister Etta McDaniel were also actors.

Before her acting career began, McDaniel was a songwriter. She worked with her brother on his minstrel show. When he died in 1916, the troupe began to lose money, and Hattie only reached her big break in 1920. Since then until 1925 she appeared on the Professor George Morrison’s Melody Hounds- a black touring ensemble. She also began her radio career with the band and recorded many of her songs with Okeh Records and Paramount Records. After the stock market crash in 1929, McDaniel could not find any other work than as a washroom attendant and waitress at Club Madrid in Milwaukee. Eventually, she was allowed to perform at the club.

In 1931, McDaniel joined her brother Sam and sister Etta in Los Angeles. She first struggled to get a film job and worked as a maid and as a cook. Her brother Sam later secured her a spot on KNX radio program, where she performed as Hi-Hat Hattie, a bossy maid who often “forgets her place.” Hattie first appeared on the big screen in the 1932 movie The Golden West. The following year, she was featured in the highly successful film I’m No Angel. In 1934, McDaniel joined the Screen Actors Guild and began getting bigger roles. She was under a contract with Fox Film Corporation and starred in movies like The Little Colonel with Shirley Temple and Judge Priest, where she played the leading part. In this film, McDaniel also showed the full range of her singing talent.

In 1935, McDaniel was played a maid in Alice Adams and also in China Seas, her first movie with Clark Gable. In 1936, McDaniel played Queenie in the successful film Show Boat. After this project, many other successful roles followed, including MGM’s Saratoga (1937), The Shopworn Angel (1938) and The Mad Miss Manton (1938). At this point in her career, McDaniel was criticized by the black community for the roles she was accepting. She mostly became known for playing a sassy and opinionated maid.

When the casting process began for the 1939 film Gone With The Wind, the competition to win the role for Mammy was almost as big as for the role of Scarlett O’Hara. Even the First Lady Eleanor Roosevelt wrote to the film producer, asking her maid to be given the part. Sources claim that Clark Gable recommended McDaniel for the part. She went to the audition dressed in an authentic maid’s uniform and won the part.

The film premiered in Atlanta, Georgi on December 15, 1939, but McDaniel was not allowed to attend due to Georgia’s segregation laws. For her performance, McDaniel won the 1939 Academy Award for Best Supporting Actress, becoming the first black American to win an Oscar. While the black community was happy for her victory, many believed that the film celebrated slave system.

During the Academy Awards ceremony, McDaniel and her escort had to sit at a segregated table at the far wall from the room. Her agent William Meiklejohn sat at the same table. Gone With The Winds won in total ten Academy Awards, which was a record for that time.

After her major success, McDaniel starred in the 1942 film In This Our Life with Bette Davis. The following year she starred in the Warner Bro’s Thank Your Lucky Stars, a part which earned her many positive reviews. She mostly continued to play maids during the war years.

One of McDaniel’s last film appearances was in the 1948 movie Mickey and 1949 movie Family Honeymoon. She remained active on radio and television. She became the first African American to host her radio show- the comedy series Beulah. She later starred on the ABC television version of the show. The show was a hit but only earned $2,000 a week for her.

When McDaniel was 15 years old, she married Howard Hickman. They were married in 1911, but unfortunately, her husband passed away in 1915. Her second marriage was to George Langford in 1925, but soon after he died of a gunshot wound.

McDaniel’s third marriage was to James Lloyd Crawford in 1941. He was a real estate salesman. In 1945, McDaniel announced that she was pregnant. It later turned out that McDaniel was suffering from a false pregnancy and fell into depression. In 1945, she divorced Crawford. She later revealed that Crawford was jealous of her career and at one time even threatened to kill her. In 1949, McDaniel married Larry Williams but divorced him the following year. McDaniel never had any children.

In 1950, McDaniel suffered from a heart condition and was brought to Temple Hospital in a critical condition. She recovered and was sent home to recover. The same year, she found out that she has breast cancer. McDaniel died at the age of 57 years, in 1952. Her last will stated that her Oscar should be awarded to Howard University. At the time of her death, McDaniel owned around $10,000, but the IRS claimed that she owns more than $11,000 in taxes. In the end, the court ordered all of her property, including her Oscar to be sold to pay off creditors.

Hattie McDaniel was later honored with two stars on the Hollywood Walk of Fame- one for her contributions to radio and one for motion pictures. In 1975, she was inducted into the Black Filmmakers Hall of Fame. In 2015, her great-grandnephew began producing a three-part documentary on her life.