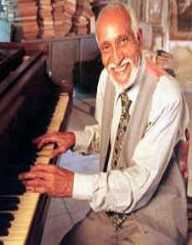 Ruben Gonzalez was born on May 26, 1919, in Santa Clara, Cuba. He was a famous Cuban pianist with a unique style especially the jazz. He played the piano between the 1940s and the 1980s before he retired. In his active years, he collaborated with other famous Cuban artists including Arsenio Rodriguez, Paulina Alvarez, and Enrique Jorrin.

His genres included Son, danzón, mambo, chachachá, Afro-Cuban jazz and descarga. He has also recorded his solo music and done several live performances. He died on December 8, 2003, in Havana, Cuba.

Ruben Gonzalez Ruben was born Rubén González Fontanills on May 26, 1919, in Santa Clara, Cuba. At the age of six, his family relocated to Encrucijada. He began playing the piano at the age of seven and attended the Cienfuegos Conservatory and graduated later at the age of fifteen.

His later years were driven by a passion for becoming a physician and minor in music. He studied medicine, but after four years, he dropped and pursued music full time. His style of playing attracted some people who encouraged him to be major in music. His after high school years were consumed in music and he played with several bands around Cienfuegos.

Ruben Gonzalez traveled to Havana in 1941 and was privileged to play the piano alongside the iconic singer Paulina Alvarez. He also met other acclaimed pianists like René Hernández, Anselmo Sacasas, Jesús López and Facundo Rivero.

In 1943, he played alongside Arsenio Rodriguez and performed in several Orchestras. The duo did several recordings together which were released to the public by RCA Victor. However, in 1945, he parted ways with Rodriguez and joined the Estrellas Negras musicians in Panama. After the Estrellas Negras musical tour, he returned to Cuba and played alongside Alberto Ruiz and Mongo Santamaria.

In the 1950s, he had gained recognition in Cuba and most parts of Southern America especially the Latino nation. He traveled to Cuba in 1961 and became a member of the Orquesta Riverside band.

Ruben Gonzalez re-united with the band Orquesta de Enrique Jorrín in 1962 and for 25 years played together. With much experience and success, Ruben recorded his first solo debut in 1975 followed by a second one in 1979. In 1987, his friend and music partner Jorrin died, and he succeeded him as the bandleader but later retired.

However, after his retirement, he was persuaded to take up music again and explore other unique styles. He joined Juan de Marcos Gonzalez who had two big musical projects and required an excellent pianist. Ruben grabbed the opportunity to work with Juan de Marcos Gonzalez which gave birth to the Afro-Cuban All Stars and the Buena Vista Social Club.

Juan de Marcos was the band leader of the Afro-Cuban All Stars, and it delved much into playing the Latin Music. On the other hand, Buena Vista Social Club played much of Cuban Music. In 1997, the ensemble Afro-Cuban recorded their first album titled ‘A Todo Cuba De Gusta.’ Their other album was titled ‘Buena Vista Social Club’ which was also done in 1997. The project earned them a Grammy Award in 1997 when it was released.

Ruben Gonzalez continued to play and recorded the album ‘Chanchullo’ in between 1997 and early 2000. He is remembered as the man who introduced the ‘Son Cubano’ piano style. His wife was known as Eneida Lima with whom he was survived. He died on December 8, 2003, in Havana at the age of eighty-four.