Initially, both the Rabbit and Monkey compatibility will be drawn to each other, most likely from across the room at a party. They will have mutual respect for each other’s personalities.

The Chinese Monkey animal sign will make the Rabbit laugh. They will love how the Rabbit intently gives him or her its undivided attention. They will chatter here and there, analyzing the rest of those at the function, laughing that someone else had the exact same thought, yet the party stops soon thereafter.

Soon when the Rabbit is dating the Monkey, they will find that they don’t have much else to talk about, as they already have run over the issue time and time again in their own heads.

The coming together of the Rabbit male Monkey female to try and make things work in their relationship is something beautiful. Both of these folks are from different worlds. The good thing is that the Rabbit is loyal and that the Monkey is playful. With this in mind, you can guess that the Rabbit Monkey in love will be a profound match that will last. 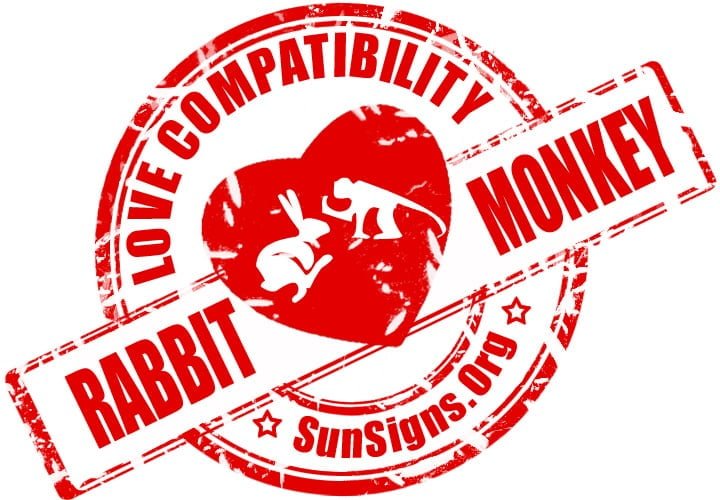 Will the Rabbit Monkey soulmates stand the test of time to the point where the two get married? Well, the Rabbit Monkey relationship will be one with much potential for hostility – on both sides. They will soon find that they have nothing in common and they will both come to the same conclusion.

However, Rabbit and Monkey friendship is one that is built on peace and a comfortable way of life. Conflicts will be a common thing in this union and this will not stop them from pushing the right buttons for things to work.

The Rabbit and Monkey friendship will get stronger in the beginning because of their mutual love for social gatherings and perception of character. This will unite them in the beginning, but it will be the very thing that tears them apart.

Although the Rabbit and Monkey in love may end up finding common ground in their social circles, that may be where the relationship should stay. Both of them do well in these situations and it may seem to the rest of the world that all is hunky-dory between the two of them. Yet their personas are quite different, which is a cause for concern.

The Monkey tends to bring home the party, always making people laugh, even pulling outrageous stunts. They will have people dancing on the tables. They will easily become bored with their partner’s slower more peaceful lifestyle.

The Rabbit on the other hand has a calming effect on those around them. They will be off in the corner comforting another while they cry their eyes out. Sooner or later, they will begin to find their lover’s antics all a show and start searching for something real.

Are Rabbit and Monkey Compatible?

Out of sheer boredom, the Monkey man or Monkey woman will end up playing tricks with the Rabbit man or Rabbit woman, purely for its own amusement. This will hurt their partner’s feelings, causing them to retreat and brood on just how to get back at the Monkey.

The male Rabbit will feel hurt and taken advantage of by their partner and the female Monkey will feel like they never understood, especially since Monkeys have almost impossible standards for their partners. This Rabbit Monkey marriage will become more of a competition of who gets the final word than any buds of romance.

And both the male Monkey and the female Rabbit can easily get stuck in their heads. These are two Chinese zodiac signs that think about everything. This may cause them to over-analyze the relationship, and unfortunately, neither will want to take action with their conclusions.

Even in bed, the Rabbit Monkey couple will prefer to push any problems under the rug thus not being able to satisfy each other sexually. This will lead them to dead silent dinners and quite possibly other love affairs until one simply says enough is enough and breaks up. 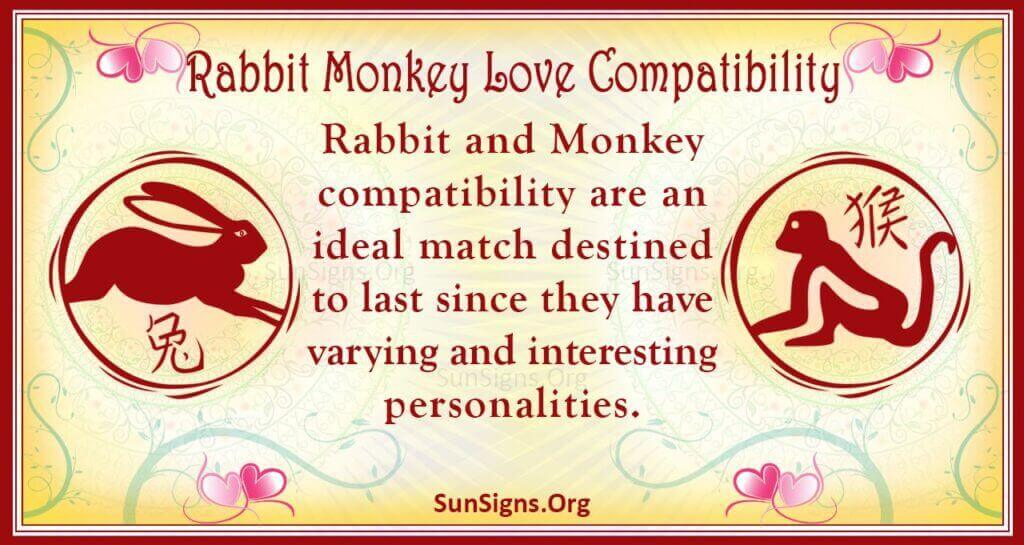 Unfortunately, the Rabbit and Monkey relationship is one that will do all parties involved a favor if they opt to just be friends. Neither of these two Chinese astrology signs will understand each other’s needs in the relationship.

This pairing will end up cultivating more thorns than roses as there is no love compatibility between the Rabbit and Monkey. As friends, they can function just fine, yet as soulmates, beware. They just may end up despising each other.

The Rabbit male is known for his sensible and smart nature. They always strive to be right and their arrogance can easily be seen from afar. Nonetheless, they don’t mind toning their negative attributes if it means getting what they want.

Conversely, the Monkey female is very outgoing. Partying is their second name and they will be misjudged for flaunting their abilities.

In such a match, mutual understanding is key to making their love work.

The Rabbit female is no different from the Rabbit male. Their emotional attribute is one thing that makes them stand out. In fact, this is a personality that helps to make their relationships work. Paring with the conceited and outgoing Monkey male might not be as smooth for a start. But if the two are ready to win each other over by compromising, things should be okay.

Overall, Rabbit and Monkey compatibility are an ideal match destined to last since they have varying and interesting personalities. When in love, the two will make an exciting match where partners feel loved and respected. The Monkey will need some time to work on its outgoing and chivalrous nature. The Rabbit might not be fully ready to tolerate this attribute.