The Rabbit dating the Dog Chinese sign is one of the best compatible couples in Chinese astrology. The dog is the protector of the Chinese zodiac and the rabbit eats this up. It’s not that the rabbit always needs someone to take care of them – they are very independent creatures themselves.

But they find the security they seek in the dog. Someone to catch them if they happen to fall, someone to unconditionally defend them when the rest of the world takes advantage of them, as often happens. 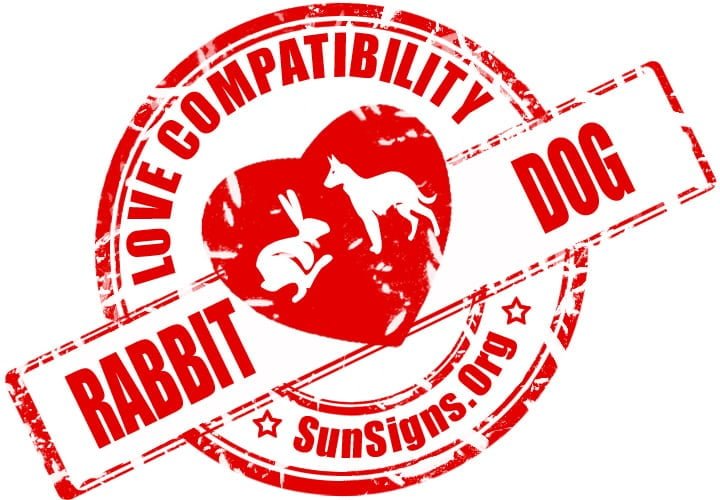 The Rabbit and Dog in love can go the distance, with some work from both sides. The key with these two Chinese zodiac signs is that they complement each other well. They may not have the same characteristics, or the same temperament.


But they understand each other and they make each other shine. Upon first meeting, they may feel that they have known each other all along, from another time, another era, another universe even.

Both of these Chinese zodiac signs can learn from each other. The dog man calls the rabbit woman to action, while the rabbit man calms down the dog man. Even in bed the Rabbit Dog sexual and love compatibility is fantastic.


The rabbit is quite shy and often detached. The rest of the world mistakes this for ignorance, when in fact it does not matter to them. Instead they prefer to be more diplomatic in their approach. They avoid conflict. Their detachment often extends to it’s emotions as well, which can either make or break the Rabbit Dog friendship.

The dog normally leaps right into a confrontation; especially one where it’s heart is involved. They are often emotionally unstable. They are quite affected by emotions, suffering from high highs and low lows. When they are happy, he or she is on top of the world. They drag everyone with them. They make excellent listeners and the most loyal of friends, which serves the rabbit well when he or she finally decides to open up.


Yet when the dog is sad, it is as if there is no end in sight for this couple. The rabbit can help stabilize and structure the dog in this way, but it has to be careful to not be too detached in it’s emotions, as their lover may take offense and feel neglected.

Yet, the male or female rabbit may also not want to commit fully and the dog’s intense emotional outburst may send them running. On the other hand, the male or female dog can also help their partner emotionally. This zodiac sign often choose to keep their feelings to themselves.

One of the beautiful things of this Rabbit and Dog relationship is whatever the rabbit dreams, the dog can make happen. They work very well as a team. Where the rabbit has trouble implementing their numerous ideas, the dog jumps in to save the day, with an unbridled passion and a drive to see it to the end.

Problems can arise in a Rabbit Dog marriage during stressful situations, as both Chinese zodiac signs have trouble handling stress. They create many unrealistic situations to worry themselves sick with and don’t handle them too well. They will have to address this issue together, otherwise it will spell trouble for the relationship in the end.

Yet, the Rabbit and Dog as soulmates have staying power. The rabbit knows just what the dog needs, while the dog’s loyalty puts the rabbit at ease. In fact they both calm each other where the other partner lacks. They will be successful not only in romance, but business as well.