What does salamander fire symbolism mean? Elementals, or the physical manifestations of the natural elements, possess energies that embody their element. Salamanders are the elemental of fire. This concept came from the scientist Paracelsus in the 16th century. He is also credited for his thoughts, observations, and naming of the three other elementals in nature. These amphibians are real animals that are available in nature.

However, they have also long been associated with the mystical occult realm in pre-modern literature. As a legend, the salamander was often depicted fairly accurately about its physical form – that is, they manifest themselves in a lizard-like form. However, they were described as having an affinity to fire, specifically fire of an elemental nature. In old fables, salamanders were said to have taught ancient humanity how to create and use fire for survival.

There is a slightly tricky aspect to the character of the fire elemental salamander. It has no real relation to the amphibious salamander. The closest connection between these two concerns the amphibian salamanders living in moist logs, often used for fire. Once the logs were chucked into the fire, the salamanders would come scurrying out. Thus, some ancestors deemed those “normal” salamanders as birthed from fire. The fire connection then seems understandable, albeit naive. Salamanders are also cited as highly poisonous beasts of mythology.

What does salamander mean spiritually? It would be wise to embrace change. Fire is a real agent of change, and although it is often destructive, its benefits cannot be ignored. It enables new germination to appear and the environment to look awesome once again. Indeed, after a moment of sorrow, there will always be time to laugh, cheer and smile.

Salamander Fire meaning that your emotions are like a time bomb. It has massive benefits, but if left out of control, it can be disastrous. Emotions occurring within you help to express a message and bring a balance in your life. So learn to identify better ways to boost your emotional intelligence and live a more fulfilled life.

The spiritual significance of salamander meaning it would help to seek help if your emotions run out of control too often and prevents you from performing your tasks well. Also, when you have a negative emotion burning within, such as anger, try to get out of sight briefly to calm your nerves. Take some deep breathes as you walk briskly and follow up on the matter when you can manage your feelings.

The symbolic meaning of salamander says that do not hide your feelings entirely because they might explode without your awareness. You can say how you feel instead of pretending not to have it at all. Furthermore, try to understand why you are feeling the way you do. Recognizing and explaining your feelings will help you make sense of what is happening and take better control.

The salamander symbolism implies that it would be brilliant not to treat yourself harshly for the emotions you feel. Instead, appreciate and accept that your emotions are real and natural. For instance, once you have understood your feelings, you can decide how and when to express them effectively.

The red salamander meaning it would be wise to learn to move on with life even after heavy emotions. Also, learn to switch your mood from a gloomy mode to a more lively and positive state. Do not remain stuck in negative focus for too long but instead try to do things that make you happy, and your mind will adjust to a positive one in a short while.

The meaning of the salamander symbol implies that focus on positive emotions throughout the day. They will help bring a sense of well-being and positive feelings even in trying moments. Try to adjust your perspective and see the positive side of everything, even the little things. 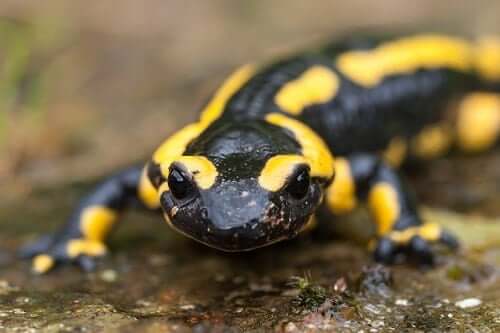 St. Elmo’s fire was also believed to be a result of fire salamanders. This weather phenomenon occurs when a coronal discharge creates a luminous plasma from a pointed object in a strong electrical field. The most common examples occur during thunderstorms and volcanic eruptions. Salamanders were considered the cause of these electrical discharges, as it was assumed that they produced electrical fields of energy.

It was also assumed that these creatures lived in volcanos. If the volcano was dormant, it meant that salamanders were to be found inside, content and sleeping.  When the volcano was erupting, though, the sentiments were not so great. These conditions indicated that the salamanders’ wrath was unfolding and that their lava tongues would soon come up to lick (a.k.a. destroy) everything in their path. From a non-weather perspective, salamanders are controlling great, radiant orbs of fire.

Imagining these creatures as possessing personalities allows us to draw even deeper and more thorough conclusions about them. Like other solar and fire creatures, these salamanders boast wild and bold traits. They take pride in being feisty, sultry, and lively. Their seemingly never-ending energy is contagious to all those around them.

Although they definitely seem like the party animals of the spiritual world, salamanders also possess symbolism of a more sophisticated nature. They bring about passionate and commanding energy that drives us to seek knowledge and wisdom. By taking in the illuminating qualities of this fire creature, we learn to trust our passions and intuition (or the fiery feelings within us) in our quest for enlightenment. To further your invocation of the fiery salamander traits, focus your attention on the South – this is the direction it is associated with.

Without a doubt, the elemental salamander is a great personification of the fire element. It allows this traditionally viewed amphibian to take a new, stronger role with fast-paced, energetic tones and vibes. With this article, you can ignite your understanding of the vehement personality behind the element of fire in easier, more personal, and literal terms.

Allow this to tap your inner musings into the consciousness and personality of the fire like Leo, Aries, and Sagittarius and all of its transformative powers. You can use this same logic and inspiration in your quest with the other elementals of our lives. In fact, you can go beyond the realms of logic and trust the spiritual ingenuity surrounding you.

In a nutshell, if you keep seeing Fire Salamander everywhere, stay closer to guys who show mature emotional intelligence and learn a skill or two from them to reinforce your emotional knowledge. You can also talk to a trusted friend or a loved one about your feelings, and they will help you explore fresh ways of thinking.