What is a Djinn, Jinn, and Genie?

What is a Djinn?

“You ain’t never, ever, ever, had a friend like me!” While this is true for the Djinn, Disney’s Aladdin couldn’t have been more wrong. The mystical being in the motion picture is indeed a genie, but most people think that the terms genie and Djinn are interchangeable. Even though the two beings are very connected, they are not the same.

While one word is an English derivative (genie) of a Romanian term (Djinn), which in turn is a derivative of the Arabic word (jinn), the latter is a demon, spirit, or other supernatural force that attaches itself to an item of some importance, such as an amulet, weapon, or crown. When the item was found and activated, Djinn would grant the user the standard three “wishes.” This is where things get interesting.

Depending on the nature of the spirit, these wishes would either backfire terribly or go smoothly until the Djinn changes its mind (Djinn are only interested in themselves). In the Arabian mythos, they are either depicted as good or evil spirits but still can manipulate the user to the fullest extent.

Genies are created when the Djinn achieves freedom (by manipulating the host to wish him free) so that the spirit curses the host to an everyday object, like an oil lamp, walking stick, or good luck charm. Not all Djinn are malevolent, though. For example, if you use your wishes for the benefit of others, then the Djinn will more than likely let you be.

But, on the other hand, if you use your wishes selfishly and put yourself above others, you’re more than likely getting stuck in a lamp for a couple of thousand years. So the genie follows the pattern that the Djinn did, but with less power.

In some mythologies, the Djinn uses illusion magic instead of black magic to lure the host back its den and feed upon it while it dreams its wishes come true. In this mythology, they aren’t tied to any object and appear to humans.

The appearance of the Djinn varies greatly. Some accounts say that it’s closer to a genie’s, with one bright skin color, no lower half, and wore Middle-Eastern jewelry. Others say they have a body similar to a human’s but with purple face tattoos and fangs. Finally, a handful of accounts say that it was nigh impossible to distinguish them from humans.

Most people are under the impression that genies and Djinn are the same. While most scholars disagree with this theory, it has some valid points. Genie is a derivative of Djinn. They have similar abilities, they both are trapped in inanimate objects, and they both manipulate humans. With that said, it is easy to see where people get confused.

The truth is, we don’t have enough solid information about Djinn and Genies, and we have too much conflicting evidence of types. No two types of Djinn are the same, but there is one thing connecting them all; black magic.

Whether they lure you into your fantastic psyche as they feast on your flesh while you’re comatose or grant you three wishes that’s the outcome is totally dependent on the temperament of the spirit, they use some heavy mojo.

Scholars are currently unsure whether Djinn uses a natural ability or a learned “dark arts.” The most important thing that is to be understood in this sense is that what made the Djinn and genies so dangerous is just how little we actually know about them.

With other creatures, we know history, weaknesses, and certain characteristics. However, Djinn is so low-key throughout mythology that even what we know about them can vary from a book or historical account.

Power of Djinn and Genie

The most well-known and beloved genie is, of course, Genie, in the Disney Feature film. However, in the source material, there is another genie, one inside Aladdin’s ring. It is said that this genie is less powerful than the one that is trapped in the lamp.

This indicates that there are different levels of power to the Djinn/genie species. It is currently unknown whether or not the genie was indeed a genie or a Djinn, but it is clear that the one in the ring had minimal power, whereas the one released from the lamp had seemingly endless power.

Djinn and THe Demon

In ancient Arabic texts, the Djinn is a subset for a demon, such as a cherub is a subset for an angel. The Quran says that they are “made of a smokeless and scorching fire”. But they can still can interact with humans (grant wishes, carry out wishes, etc.).  In fact, in the Quran, there are no “demons” per se. Just humans, angels, and the Djinn.

Does this raise another question? Why are they still portrayed as being both good and evil? This goes back to the theory that there are both Djinn and genies, separate beings. So saying that the angels are all good, the humans are a mix.

All Djinn are bad would be contrary to other sources saying that genies have personalities. This can be good or bad except that genies were once human themselves.

Most of the information stated before is mythological, but it is impossible to mention the Quran without speaking of the beings in other religious texts. For example, the Quran states that God made the Djinn from smoke, where a man was made by clay.

The Djinn, Iblis, abused his “free will” and refused to bow to God. He was then punished and became Shaytan, or more commonly referred to as Satan. In Christianity, this concept is thought-provoking. Before the earth was created, the angel Lucifer was in charge of a revolt that led to his eventual punishment and labeled Satan, translating to the English word adversary.

One type of Djinn was located in Solomon’s court. Solomon was blessed with riches beyond measure with his famous wisdom bestowed on him by God. In with this wisdom came women, and with all sorts of women came all sorts of beliefs. To keep them happy, he allowed them to worship whatever they wanted.

In this, it is said that Djinn sat behind Solomon’s advisors. No doubt they influence their decisions for their own nefarious plots. In fact, this Djinn had to submit to his power ring, that he could control them. While supervising the Djinn whilst they work, Solomon died upright.

Assuming that he was still awake, the Djinn had no choice but to continue to work. But then, they noticed he hadn’t moved, and they were the first to realize he had died.

One specific type of Djinn is called a Qarin or a personal Djinn. This Djinn is assigned to each person, and its specific purpose is to influence the person to give in to its evil desires. Qarin isn’t a commonly explored aspect/belief in Islam. Most believe that Shaytan is responsible for these thoughts and there are avid followers. 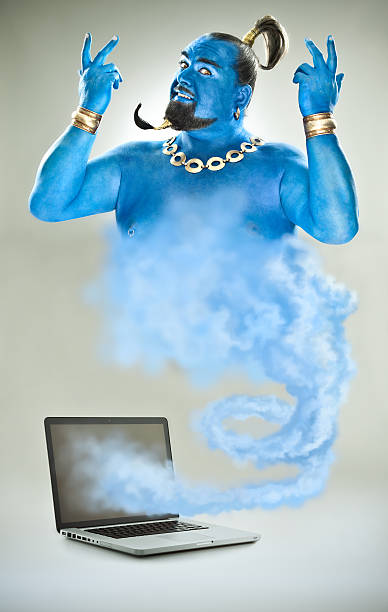 Djinn, Jinn, and Genies are demons, and that’s all there is to it. In fact, one of them (according to the Quran) is Lucifer himself. So, whether they are being portrayed as kindly beings or not, they are evil, serving darkness and darkness alone.