Rabbit and Horse Compatibility: Opposite Characters

The Rabbit and Horse compatibility is one pairing that will take some work, but it’s not impossible. The Horse will be calling the shots in this relationship – there’s no mistaking that.

They will prefer to stay home much more than their partner, though, which may or may not cause tension, depending on how confident they feel about each other.

One interesting aspect of the Rabbit Horse Chinese compatibility is the unique magnetism that they have for each other. Generally, the Rabbit man Horse woman or Rabbit woman Horse man are folks with varying characters. This means that it would be somewhat easy for partners to fall in love with each other. After all, they have few expectations. 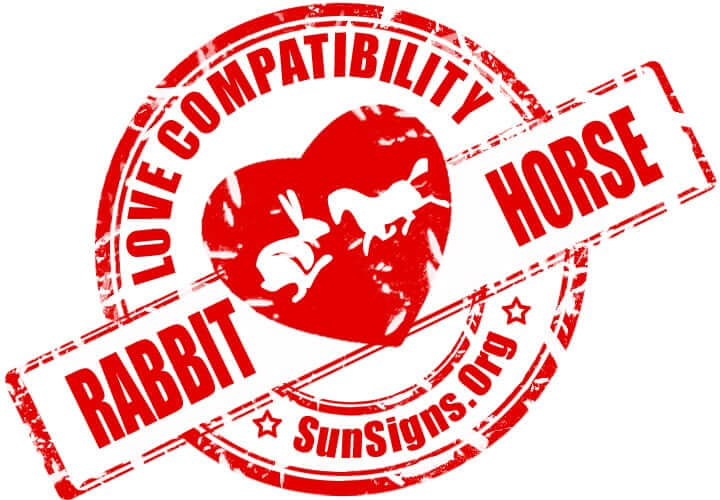 Now, this Rabbit and Horse love match is not a particularly emotional relationship in terms of love compatibility. The Horse tends to be somewhat more concerned with their own pursuits than those of anyone else. Yet with a partner such as a Rabbit, who prefers to keep its emotions to him or herself, this should not be a huge source of contention.

The Horse is still concerned with listening to its partner, but on its own watch. Either way, they will never lack in its affection for their partner. And this is a sign that falls fairly easily. It will be arduous in its pursuit of the elusive lover, something that will flatter the Rabbit very much.

In a Horse and Rabbit friendship, the Horse has a great deal more energy. In fact, the Horse has the most energy of all of the Chinese Zodiac signs. It bursts onto the scene without regard for anyone or anything. The Rabbit might do well at calming their partner down when they are dating, so long as it remembers that they will never be tamed, only subdued for periods of time.

If the Chinese Horse’s energy is channeled into the bedroom, this relationship does have the potential to be rather sexually steamy. The never-ending energy of the Horse and the sexual nature of the Rabbit in bed will make for much fun between the sheets for these two.

With some dedication, the Horse and Rabbit marriage can form a lasting union, although it will take some commitment on both sides. Commitment is something that can be a challenge for the Rabbit male, especially if it is not entirely convinced. The female Horse will not necessarily have such a problem committing, so long as her lover respects her freedom.

Both of these Chinese zodiac signs value their home. This is something that they can bond with, yet the Rabbit must understand that at the end of the day, the home will always be the Horse’s – especially if it is Horse man. Finances could very well be a subject to spark great debate among this couple.

Yet the Rabbit’s nature is to avoid conflict, which will most likely lead it to concede to the Horse on many matters. And the male Horse is one sign that gets its way. This will work fine for both so long as the issue at hand isn’t one of great importance to both. Otherwise, the female Rabbit will end up feeling walked over and taken advantage of, as they often do in life. Then the breakup of the Rabbit Horse relationship is inevitable.

Nevertheless, the Rabbit will find much satisfaction in its Horse’s energetic fondness for him or her when they are together. Most likely they will not be too bothered by their partner’s desire for adventure.

You might be curious to know more about the Rabbit’s personality and how they will impact any relationship they enter into. The year of the Rabbit is considered lucky. Consequently, it goes without saying that their luck might favor them in their love affairs. They are sentimental and they easily let go of their emotions.

On the other hand, if you’re wondering whether Horse and Rabbit are compatible, then you would be surprised to realize that they definitely are. With the high confidence the Horse has, there is no doubt that they will lure the Rabbit with their never-ending sweet charms. From the Horse’s perspective, love is meant to be. This means that they will do their best to ensure that their love is built on a solid foundation. 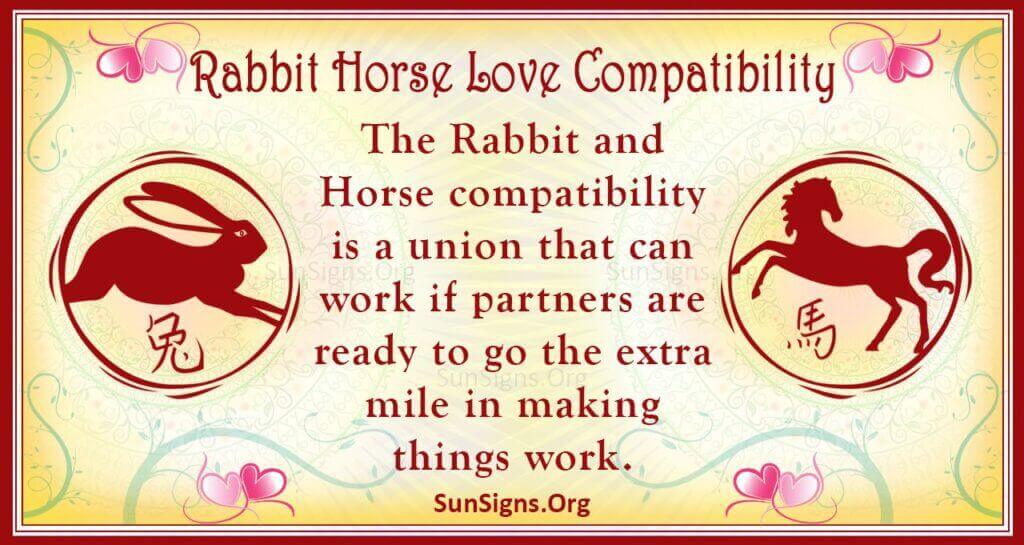 Both the Rabbit woman and Horse man have the potential to balance the other one out, without infringing too much on the other’s respective ideals. While the Rabbit woman will bring their emotions to the table, the Horse man will ensure that confidence prevails in their home. This is a good match bearing in mind that there is something to expect from either side.

The Rabbit male and Horse female as soulmates are no different in that it will take some work, yet this is a relationship in which the hard work might pay off. Sure, there will be temperamental issues to deal with from the Horse woman, but the emotional nature of the Rabbit man will guarantee that things work out.

Well, the Rabbit and Horse compatibility is a union that can work if partners are ready to go the extra mile in making things work. It takes two to tangle, and these are lovers that would stop at nothing to make their relationship or marriage work. The Horse will only need to work on its ego and the Rabbit should be less emotional.