You have been studying Feng Shui long enough to know that it is an ancient Chinese philosophy about the physical and spiritual world, yet it is not a religion. You know that its main concern is with the balance and harmony of energy and nature. This makes sense, and yet you have seen websites pop up that talk about the “Feng Shui Buddha.” How is this possible? First, it is important to know something about the Buddha.

“Buddha” is actually a title that means “one who is awake,” which means spiritually awake. The Buddha was born as a man named Siddhartha Gautama approximately 2,500 years ago in Nepal. Some people are under the misconception that Buddhism is a religion; it is not. The Buddha never claimed to be a prophet or for that matter, a god. Instead, Buddhism, like Feng Shui, is a philosophy and a path to enlightenment. Those paths are different, but he is still an inspiration to millions of people, regardless of their belief systems. Here are some things you may not know about the Feng Shui Buddha, also known as the Pu Tai, or “Laughing Buddha.” 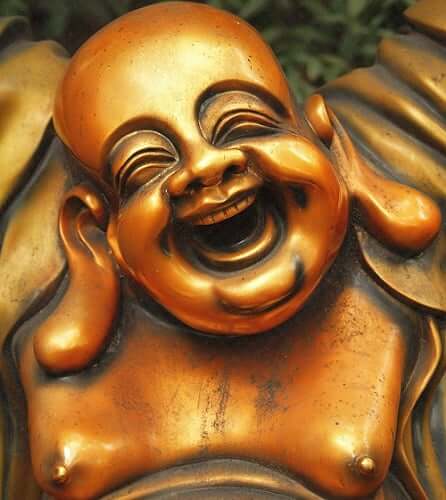 #1. Based on Chinese Folktales

These folktales originated from around the 10th century, and they focus on a Ch’an monk named Qieci, or Ch’i-t’zu, who came from what is now the Zhejiang province. He was a much-loved figure who loved children, carried sacks full of treats for them, and did some minor miracles, but he was best known for declaring himself the then-modern incarnation of the Buddha. He then became known as Pu Tai. He is most often seen at the entrance of most Chinese Buddhist temples, and he is associated with happiness, charity, and prosperity, but he is also seen as a protector of the feeble, the destitute, and most of all children. The concept of rubbing his belly for luck is a folk tradition, not a Buddhist one.

He is always smiling, and he radiates joy. If there is tension in the home between family members, place the Laughing Buddha in the Eastern sector (Family Luck part) of the home. Another option is to locate the figure in a place where family can see him while they are gathered, such as the living room. Many Feng Shui practitioners actually suggest making him the first thing you see when you enter the home. He is a constant, gentle reminder of laughter and love.

If the tension is at work, don’t be afraid to display the Laughing Buddha on your desk. Who wouldn’t be in a better mood after seeing him? He detoxifies the environment, physically and spiritually. If your Laughing Buddha is holding a fan, it means he is blowing away bad energy and your difficulties with it. He is also shown with a cloth bag sometimes. Some interpret this as a treasure bag, while others assume his is taking away your anxieties and packing them away so you. Either way, it is a nice addition!

Not only will a Laughing Buddha dispel tension at work, but it will enhance your performance, improve your standing, and increase your income. Part of this comes from the lack of tension in the air, believe it or not! Often, figures of the Laughing Buddha meant to boost financial luck will also display pots of gold, ingots, treasure bags, or even coins, all of which symbolize money. There are even statues of the Laughing Buddha sitting on a money frog or dragon turtle with a coin in its mouth.

Money frogs and dragon turtles are, all by themselves, good luck items when it comes to money. When put together with the Laughing Buddha, they become a very powerful symbol. Whether you place your Buddha in the office or at home, make sure he is in the southeast corner, known as the wealth sector. This will boost his ability to help you. At the same time, the Laughing Buddha’s presence will remind you not to get too greedy; happiness, health, and family have a place in your life too!

It is good to have the figure holding a bowl, which shows that the owner is ready to receive the good luck his or her Buddha has to offer. The best kind of Laughing Buddha for this purpose is one made of crystal, or one wearing or holding beads of wisdom. It will become a focal point for the student. Placing a Laughing Buddha on a student’s desk will, once again, disperse negative energy and strain, allowing that student to focus and concentrate better. The result? Better understanding which leads to better work and better grades.

Look for a Laughing Buddha with a Wu Lou, which is also a symbol of good health. A Wu Lou was originally a hollowed-out gourd, but today it is available in a wide variety of materials (even though it retains the gourd shape). If the Buddha is wearing a big hat, this is a good sign. The hat represents a long, healthy life. Combining symbols makes the sum result that much more powerful. In any case, place the figure in the eastern corner of the home for best results.

A couple yearning for children should find a Laughing Buddha covered in children climbing all over him. The bag that the legends say he carried was originally supposed to be for children. It was filled with treats for them. What better way to attract children! This figure needs to be placed in the western corner of the house for descendants’ luck.

Never place your Buddha on the floor, ground, the bathroom, or the kitchen, as any of these places is considered very disrespectful. In fact, make sure you never look down on the Buddha. Be mindful of who and what the Laughing Buddha represents.