The Rabbit and Tiger compatibility may be one that might be tough to work out. At first, the Rabbit might be intrigued by the Tiger, drawn to its powerful and noble nature, but soon the meek Rabbits may be overwhelmed by this cantankerous animal.

The odds favor the fact that the Rabbit Tiger married couple could indeed make things work. Contrary to what you might believe, this pair can meet in the middle to ensure their love works. One of the main things that the couple would have to work on is their varying personalities. At first, the Tiger might appear boastful in the eyes of the Rabbit. But this is something they could work on. Conversely, the Rabbit might appear weak, but again, this is a personality that can easily change. The issue is that both partners should be willing to understand the other. 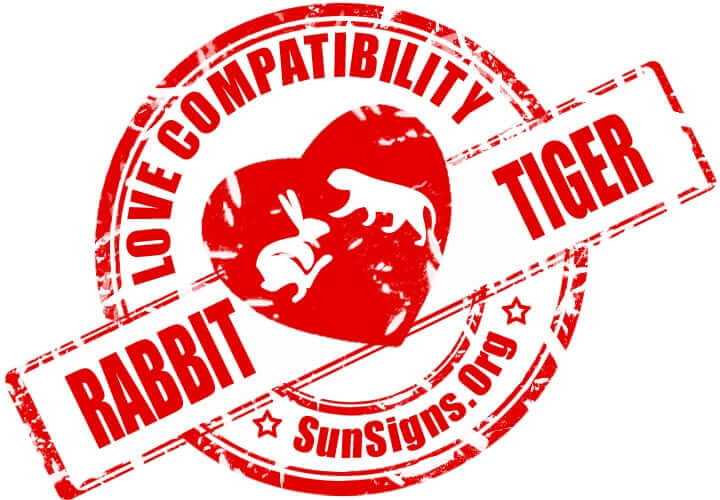 The Tiger will want to seek out danger and adventure in the wild beyond and the Rabbit would rather crawl back into its hole. Let’s just say it’s a good thing that both these Chinese Zodiac signs are very independent as the Rabbit-Tiger compatibility does not give any guarantees.

So maybe they won’t want to do the same things all the time, but there will be mutual respect in the Rabbit and Tiger friendship. The Rabbit will hold the Tiger in high esteem for its moral beliefs. The Tiger will defend justice to the death, often sticking up for the little man.

And quite often this underdog is someone like the Rabbit. They will be drawn to protect their lover and the Rabbit will, in turn, feel loved and cared for, especially since it’s rather rare that anyone sticks up for them. The rest of the world usually just walks all over them. In turn, the Tiger will respect the Rabbit man or woman for their noble character, appreciating their genuinely good nature and harmony with the world around them.

In addition, the male or female Tiger’s passionate expression of its feelings will help calm the male or female Rabbit’s insecurity. That is if they express their mad love to the Rabbit. Any other feelings might be cause for alarm, as the Tigers show feelings more deeply and more intensely than any other Chinese astrology sign. When this sign is in love, the whole world knows it. But the whole world also knows when it’s mad, too.

Are Rabbit and Tiger Compatible?

Unfortunately, Chinese astrology compatibility predicts that the Tiger may soon get bored. They are one of the most lively of the Chinese Zodiac. If they don’t receive constant stimulation, be it physically or mentally, they will quickly move along, darting for the next perilous venture, leaving the Rabbit in the dust. They can’t stand boredom, much less in a relationship resulting in a breakup between the Rabbit male Tiger female soulmates.

In any situation, the Chinese Tiger animal sign is a handful. And the Rabbit is one of the least capable to handle it. It’s just that they will not know what to do with their bold partner, most likely causing them to retreat. Even in bed, it is the same story as the Tiger will try to sexually dominate the demure Rabbit.

The issue with the Rabbit man Tiger woman or Rabbit woman Tiger man marriage is not that they are such a horrible match for each other. It’s more that they just are not the most perfect. Both have such great potential to make a difference in the lives of those around them, especially when they use their signs’ characteristics to the fullest.

But the Chinese compatibility between the Rabbit and Tiger in love mutes those attributes significantly. It doesn’t allow for either to be completely themselves, instead, it stifles both parties. Nor will this relationship have the sparks that one would expect from a romantic interlude. The Rabbit and the Tiger compatibility is just not meant to be for a long time in most cases unless there is an intervention of some kind.

The Rabbit Tiger Chinese zodiac compatibility indicates that this match will only work when partners are prepared to compromise. After all, compromise is key to any successful love affair. These two should understand that they are from different worlds. Consequently, it is by mutual understanding that they can find a way of dealing with their weaknesses. When love works for them, they will be happy they stood for each other. 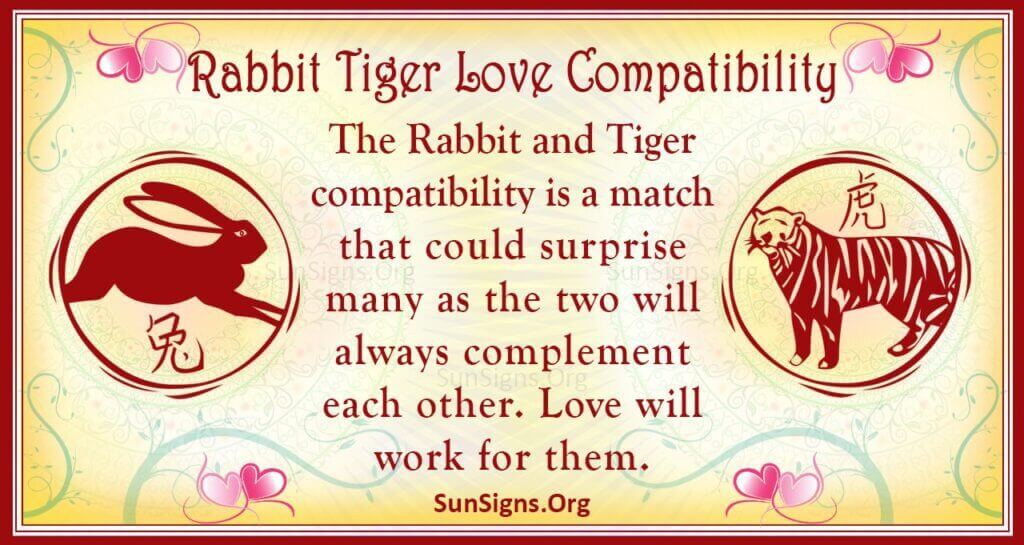 Rabbit Tiger friendship compatibility is something that could work. The good thing is that the Rabbit’s humble nature will be of great importance in taming the wild and ravenous Tiger. As friends, the two will be careful not to cross each other’s boundaries. With respect, they can be sure to make their friendship last long. The best part is that they can even come together as business partners as indicated below.

The Rabbit and Tiger business compatibility could work. Well, thanks to their complementary personalities, the pair can take the time to invest in themselves and others. This will only work in situations where the Tiger is allowed to take the lead.

In a word, the Rabbit and Tiger compatibility is a match that could surprise many as the two will always complement each other. Love will work for them if they value the importance of compromise.