The Rabbit and Rat compatibility can be very good or very bad. As with any relationship, differences can be worked on and progress can be made. Yet the Rabbit Rat compatibility will take a good deal more effort than the average, often leaving the two asking, “Why? For what”? This is a partnership in which they have will end up working more against the relationship than for it.

One interesting aspect of the Rabbit Rat love match is that they are both generous. These folks will do anything to provide for the other. This comes out naturally because they understand the benefit of being kind toward each other. Fortunately, Rabbit Rat soulmates can last long together due to the positive attitude that surrounds their relationship. 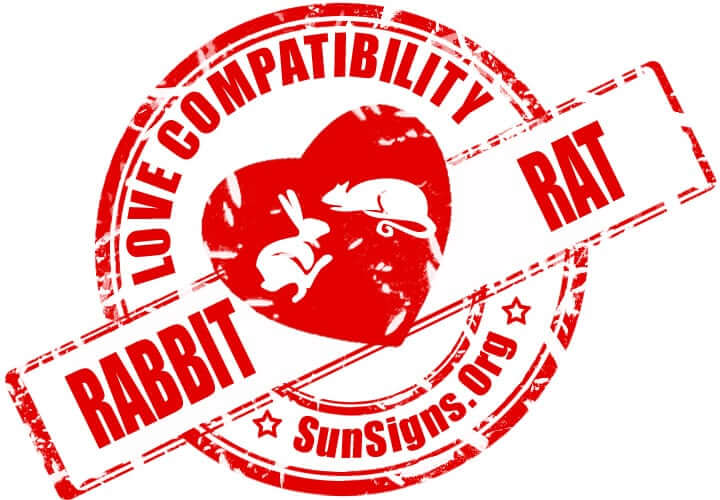 Initially, when the Rabbit and Rat start dating, they may fall hard for each other. They share a mutual love for the arts and new learning. The Rabbit will be elusive, a quality that always tends to attract lovers.

In some ways these two Chinese astrology signs are similar. Yes, both are somewhat secretive. Yet their respective secretive tendencies stem from different roots. The Rabbit comes across as secretive due to its shy and whimsical nature, while the Rat is secretive most likely because they are plotting something.

Another similarity is that they have very high standards for their partners. The Rabbit and at relationship might begin for this sole reason. They meet their own personal standards, which is often rare for both of them. Yet that characteristic could also easily dissuade any romantic notions between the two. That is, they don’t meet those same high standards previously set.

The idea of setting high standards for each other is something that will work great when the Rabit Rat couple are nothing but friends. Well, of course, this doesn’t mean that they will not fall in love with each other. Contrary to what you might be thinking, the pair can make a wonderful match.

Unfortunately, Chinese zodiac compatibility predicts that there will most likely be more sources of contention between the Rabbit and Rat soulmates than sources of unity. An avid talker, the Rat will want their partner to actively engage in whatever topic this Chatty Cathy brings up.

Regrettably, the Rabbit won’t be able to. They will be off dreaming in la-la land, which will leave their partner feeling neglected and unfulfilled. Their aloofness will bring out the Rat’s often hidden insecurity. They need constant attention from their partners to feel good in the relationship. Alas, even in bed, the Rabbit and Rat compatibility will just be too detached thus not satisfying sexually.

Soon, the Rat might become frustrated with their partner’s lack of commitment. Nor will the Rabbit man or woman ever truly commit to their lover. There is always something untrustworthy about the Rat man or woman. And with good reason, Rats are cunning and very secretive about their personal affairs. The male or female Rabbit will soon see through this and elusively evade a romantic entanglement with the male or female Rat. Its cunning sense of perception will be on high alert at their games.

To be honest, the Rabbit and Rat marriage is not the most favorable of unions. Of course, a Rabbit Rat friendship can function, but if there is much better compatibility found among other signs, why not go for the gold, instead? The majority of the time it will end up being a short fling.

The emotional nature of the Rabbit is what might be helpful in making sure this union lasts long. They will do their best to rely on their emotions to better understand their Rat partner. Therefore, the Rabbit Rat marriage could work if couples are ready to make things work. The good news is that nothing will be difficult for them since everything happens for a reason. And this is one thing that the lovers appreciate and value.

The Rabbit will quietly break up as if nothing happened and erasing it from its memory as quickly as it started. For a union such as this to make it, both the Rabbit and Rat in love will have to look for more love compatibility within the rest of their Chinese zodiac charts to go the distance. 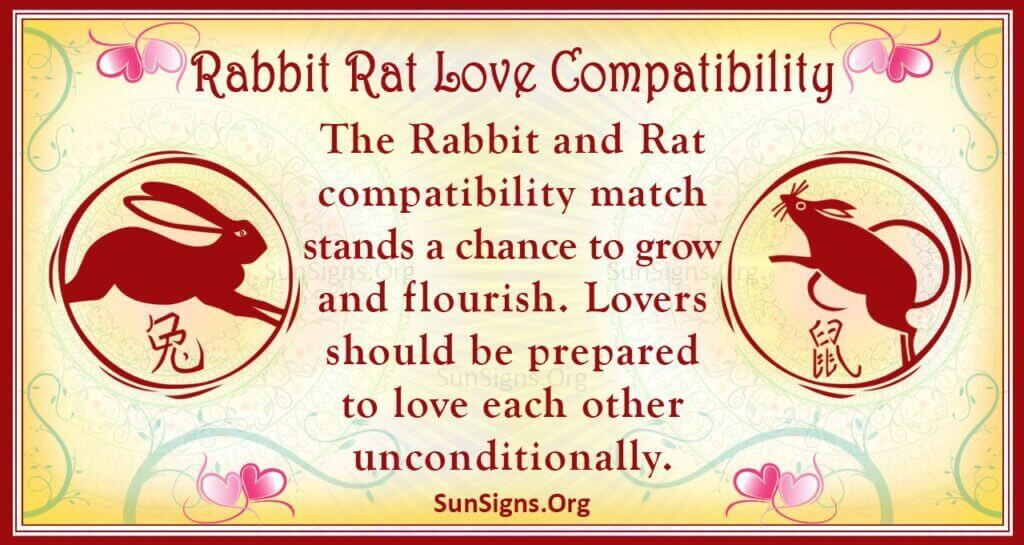 What about Rabbit and Rat business compatibility? Sure, you might be curious to know whether these two can work together in business. Surprisingly, despite their varying personalities, they can do something productive. The Rabbit’s witty nature combined with the creativity of the Rat will guarantee that they can engage in business together. However, they should be careful not to allow their emotions to get the best of them.

Are Rabbit and Rat Compatible?

With the information you have about the Rabbit and Rat Chinese compatibility, you may want to be certain whether the pair are compatible. The reality is that there is no perfect relationship out there. People from different walks of life meet together to share the love they have for each other. Consequently, for this union to work, it depends on how ready the respective partners are to make things work.

In conclusion, the Rabbit and Rat compatibility match stands a chance to grow and flourish. Lovers should be prepared to love each other unconditionally.