How good or bad is the love compatibility between a Leo and Scorpio emotionally, mentally and sexually? Read on…

When a Leo and a Scorpio are in love they are bound to have an exciting time. While these star signs share some similarities, it is their differences that help to balance each other out. This is because in certain scenarios one sign craves getting one thing and the other sign craves giving the same thing which adds spice to the Leo Scorpio love compatibility.

For instance, the Leo astrology sign loves to receive compliments. This sign practically runs on things like this to boost their ego. Scorpio loves giving their partner compliments, and won’t feel burdened when they find out that their lover needs that sort of reassurance. The Leo and Scorpio love compatibility have many opposite traits that work well this way, giving them a caring, but dynamic relationship.

Leo is an independent and proud sign. People who are born under the sign of the lion tend to be hardworking individuals who set their goals high. When in school they are willing to study to get good grades and scholarships. When they are in the workplace they do their job as efficiently as possible. No matter where they are they always seem to know who is the right person to talk to if they want to get ahead.

The Leo man or Leo woman is always looking out for him or herself, so when a stranger catches their eye it really is something special. Leo is most attracted to people who give off the same vibe as they do. They won’t want to be with someone who spends their days wasting time, or people who get what they want without working for it. They will want to be with someone who is charming, has high self-worth, and is as ambitious as they are when it some to their goals.

The Scorpio star sign is an efficient sign to say the least, so it is no wonder that a Leo would be interested in someone who was born under this sign. Like Leo, the Scorpion knows what they need to do in order to get their job done well so that they can advance in the world. They spend a lot of time paying close attention to detail, much like the Virgo sign. This trait helps them to pick up on things that others don’t, giving them an advantage when it comes to advancing.

Scorpio’s mind isn’t just on being better than someone, what they really care about is that they are doing something well. Scorpio will never go at something half-heartedly, and that goes for their romantic life as well. Scorpio will pay attention to what sort of things their partner wants, and they will deliver on it. Of course they will want their partner to satisfy their needs as well in a Leo Scorpio relationship. 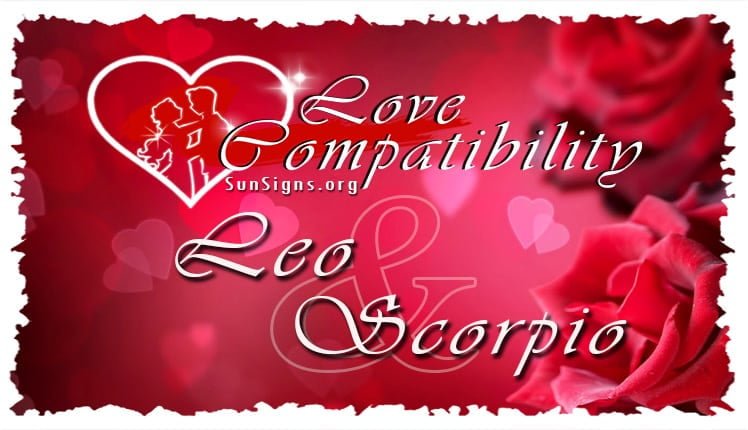 These signs are great at working together and playing on each other’s strengths. Let’s look at a few of the pros of the Leo and Scorpio compatibility.

When these two astrology signs first meet it is likely that it will be Leo that attracts Scorpio at first glance rather than the other way around. It is simply that Leo is a social and outgoing sign. They have confidence to spare, which makes it easy to start talking to someone who they are attracted to. They know that if they try their hardest that there is a good chance that they will get what they are aiming for. Dating a Leo means a lot of action!

Leo is a very determined sign when it comes to romance, as well as in other areas of their life. Leo also seems to radiate a sort of aura of success and confidence around them, which could also be why the Scorpio man or Scorpio woman is so attracted to this sign. It is almost like Leo is asking for their attention, even if they just give a wink from across a bar.

Once these two signs get to talking they will find that they have many similarities, as well as a few attractive differences. While talking it is likely that Leo will try to give off an adventurous vibe, even though they detest spending their hard-earned money on frivolous trips and vacations. At first it is all an act to get Scorpio to be interested in him or her when the Leo is dating the Scorpio.

While Leo can be blatant about being interested, Scorpio will try to be more mysterious about how they are feeling. They will want to keep the Leo male or Leo female guessing, which is exactly what will happen. In a Leo Scorpio friendship, both have a flirtatious nature, and when they meet they are sure to take this out on each other, which neither of them mind, of course.

Leo will try to figure out Scorpio as they talk, becoming more and more attractive as he or she does so. Scorpio will love this game and the attention that they are getting. It is likely that by the end of the night that these two will be so enthralled with each other that they will end up hitting the sheets together.

The Leo Scorpio sexually are passionate in bed. It is like they are trying to prove something to each other, which makes it all the more exciting. It is likely that Leo will want to take command in a sexual situation, no matter what their gender is. And it is likely that Scorpio will not mind so long as Leo succeeds in satisfying them, which he or she is more than likely to do. Read more about Scorpio sexual traits.

These two signs are likely to hit it off when they first meet, and their passion is unmatched in the bedroom, but when it comes to a long-term relationship between these signs things can become difficult to manage. Let’s take a look at some of the cons of a Leo and Scorpio love compatibility.

In a Leo Scorpio marriage, these two astrology signs will both fight for power. This can lead to many verbal and sometimes physical fights between the two of them. Also, Scorpio tends to be possessive while they are also trying to be in charge. This gives off a threatening vibe to Leo, who will not want to be controlled by anyone, especially not his or her romantic partner.

When it comes to being in social situations it would not be odd for Leo to brag about his or her sexual conquests. They are proud of their accomplishments and will tell their stories, even if their partner doesn’t like it. While Leo is good to their partner, their motivation is to have good things done to them in return, whether it is dealing with simple compliments to complicated sexual favors. This can lead to discourse and even more fights within the relationship.

While the Leo sun sign can be shy about telling Scorpio about their feelings, they have no problem giving them a piece of their mind when they are upset. While they are passionate in the bedroom, they are also passionate in their fighting. This can lead to a relationship full of dramatic ups and downs, but in the end, it is just not likely to last long. These two will spend so much time arguing that they won’t have time to see what is really important in their relationship. They will wear each other out leading to a Leo Scorpio breakup.

Overall, this is a great Leo Scorpio love compatibility if these two signs are only interested in hooking up. Having a serious relationship between these sun signs would be complicated and would take a lot of effort from each member of the couple. While it is possible for the Leo and Scorpio soul mates to make a serious couple, it is more likely that they will fizzle out when they realize that the best thing between them is their time in bed.