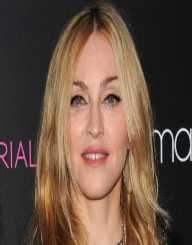 Her fans and lovers often refer Madonna as the “Queen of Pop.” She is also acclaimed as one of the most popular international artists. Born into a Catholic family and to a mother who was a faithful follower of the religion. She went through a change which made her a rebel upon the remarriage of her father after her mother's death. Madonna is a lover of dance who dropped out of school in a bid to pursue her main musical career. She became one of the prominent faces in the music industry and had sold over 300 million albums worldwide while her well-known songs are “Like a Virgin,” “Papa Don’t Preach” and “4 minutes”.

Madonna was born in the city of Bay City, Michigan on the 16th August 1958. She was born as Madonna Louise Ciccone to Madonna Fortin and Silvio Ciccone. She was born into a family with five other children. At a very tender age, her mother kicked the bucket. The shock of having to lose her mother at a young age affected her badly. The remarriage of her father coupled with the shock turned her into a rebel. Madonna schooled at St Andrews Schools, West Junior, and Rochester Adams High Schoool. Upon the completion of high school education, she got enrolled at the University of Michigan. In 1978, she dropped out to pursue her dream of dancing in New York.

Her life in New York was not rosy at first. This is because she started her career life as a waitress and a nude art modeling to pursue her dance training. Sooner, she became a member of “The Breakfast Club” band before she formed her band, “Madonna & the Sky.” In 1979, she was given a role to play in the film, “A Certain Sacrifice.” In 1980, she entered a solo contract with “Sire Records,” the owner of Warner Music Group. Her first solo album was launched in 192, and this topped the dance charts – what a great success. Madonna also released a new album in the following year, and it also fared well in the market like the previous one. A lot of copies were sold.

Her breakthrough was in 1984 when Madonna released her album “Like a Virgin.” This album was a hit in the music stores. It was the only missile she needed to be launched into the international figure. The fact is that her title track of the album stayed in the first position on Billboard Chart for six weeks. She worked in “Desperate Seeking Susan” as well as lent her voice to the number in the film “Into the Groove.” The song was a huge success and earned her another number one position in U.S. dance chart. This year seems to be a year of success for her as she sang another song “Crazy For You” which was a huge success. Later, Madonna went on her first concert tour, “The Virgin Tour.”  She worked on a wide range of albums. However, in 1989, she got an endorsement contract with Pepsi company. However, the contract was shortlived by her controversial video, “Like a Prayer.”

In 1990, Madonna released her compilation album, “The Immaculate Collection.” When the market received it, it was received with great success. It, however, made it as the “best-selling compilation album by any solo artist in history.” She worked on her first documentary film, “Madonna: Truth or Dare” and was released with the incidents that occurred during her world tour. In 1992, she co-founded the “Maverick Records” music label in association with “Warner Music Group.” She also published her erotic magazine, “SEX,” alongside the launch of her album, “Erotica” in the same here. Four years later, her performance in the musical drama, Evita, earned her an award which was acclaimed by many.

Madonna worked on her music and acting career despite all the controversies attached to it. In 2015, she released her album, “Rebel Heart, ’ and her concert tour was embarked on by the same name. She has a very good association with some production companies and brands like Semtex Girls, Hard Candy Fitness, and Truth or Dare by Madonna.

The album, “True Blue” was an immensely successful album. The album topped the charts in more than 28 countries. Her compilation album, “The Immaculate Collection” was also a hit and earned her a reputable place in the history of Music. Madonna got album registered as the best-selling compilation album by a solo artist.

Madonna won several awards for her singing as well as her acting career. She won seven Grammy Awards. She also her name credited with eleven “Guinness World Records” between 1996-2012. Unsurprisingly, she won the Juno Awards twice. She also got a “Lifetime Achievement Award” from TRL Awards.

Madonna married Sean Penn on the 16th August 1985. She divorced him later and got into a relationship with her fitness instructor. She had a daughter with him. She also got married to a director with whom she also gave birth to two sons with. She got separated from the guy in 2008 and later adopted a daughter from an orphanage in Malawi.