Uranus in the Fifth House of the Natal Chart

What happens when Uranus is in 5th House? These people are out to have a good time without worrying about the consequences.

Creativity abounds in the fifth House, and Uranus in astrology adds fun and offbeat twist to your career ideas. Your zest for life is bursting and unmatched, for you live every day to the fullest. And while not everyone understands the things that you enjoy, they always enjoy hanging out with you.

Uranus thrives in the fifth House because the planet represents ingenuity, unconventional ideas, and individuality. You love coming up with new ideas and new ways to solve problems and have fun regularly. You can’t stand normal schedules. For you, there needs to be spontaneity in your daily routine. While you like being in charge and taking care of issues at work and home in your marriage, you also need the same amount of playtime. 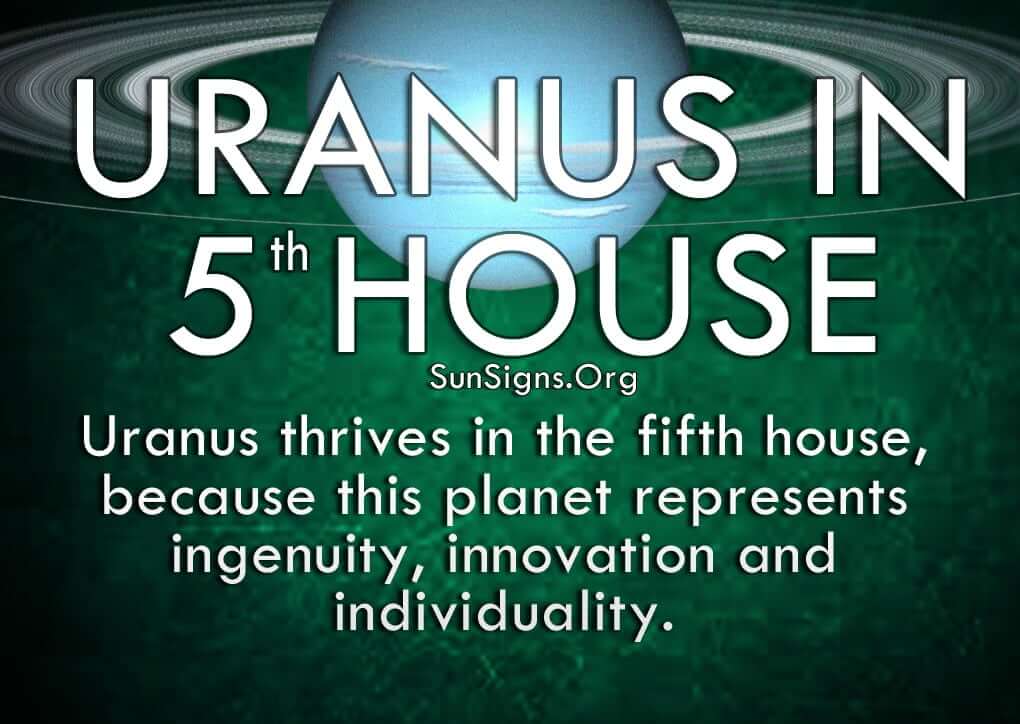 With Uranus in 5th House in your horoscope, you love being in a relationship. Fun and flirtatious, you enjoy playing the game of love, whether you’re dating or in a committed partnership. A crowd always surrounds you because of your natural magnetism, and you love putting on a show for your audience.

Uranus adds a quirky element to your personality, so not everyone will get the joke. But those who know you best find you charming and irresistible. You always have something unique in mind for recreational activities or even your regular date night, and people look forward to their next adventure with you.

You learn how to get what you want at an early age, including romantically. And Uranus allows you to explore all of these options as you get older and add to your bag of tricks.

Nothing is too serious with the Uranus in fifth house personality, and you need the freedom to do what you want when you want. You are fiercely independent and need to have friends and loved ones who understand when you do something without consulting them first. This can lead to problems, though, if you continuously leave out a partner when making decisions.

You have to learn that being in a relationship means compromise, and it doesn’t always have to be a bad thing. The main thing to be careful of is your ego. Because of your brazen manner, you sometimes appear too egotistical, which can work against you. People you know recognize and understand this about your personality, but that doesn’t always make it easier to deal with.

Uranus started being used in Astrology after its discovery in 1781. It rules the zodiac sign Aquarius which Saturn formerly ruled. Uranus is unlike any other planet. This planet has its own unique properties. It is a generational planet and is associated with revolutions and rapid changes.

Uranus rules over new technologies, science, and engineering. This planet enables the human race to advance. It is all about the future and great inventions and innovations.

Uranus in the 5th House Meaning

Is Uranus in 5th House good or bad? This placement is favorable when it comes to personal space because you value freedom and independence. Even when in a relationship, you require a lot of space to yourself. The only time you give up your independence is when you find someone special.

The importance of Uranus in the 5th House is that it teaches you how to be on your own. It is not all the time that you will be dependent on others.

Uranus in the Fifth House Children

The Fifth House is associated with children in the birth chart. Uranus in 5th House astrology reveals that your children will be special. They will exhibit traits that will make you proud of them and their progress in life.

Your children are smarter than their peers, and they do great in Mathematics, Sciences, and Engineering.

Nothing is tame in the world of the Uranus in 5th house man or woman. But you have to be careful not to come off as an overbearing date. Sometimes you go overboard with your ideas, and it can be overwhelming to some who are not as adventurous as you are.

Slow down at times and learn to read people’s different reactions to your personality and your ideas. Try to negotiate something that all parties involved will enjoy. With your brilliant mind, you’re sure to come up with something for everyone!

Be cautious about looking like a bully, and be mindful of your melodramatic tendencies. While you are all about fun and excitement, those around you might not be up for such a party all the time. You have errands and responsibilities to deal with, and sometimes that burden falls on other people because you’re too busy having fun elsewhere. (This is bound to happen as Leo is the zodiac sign ruling over the 5th House). Learn to balance your chores with your need for constant pleasure, and there is nothing that can stand in the way of your happiness.