How good or bad is the love compatibility between a Pisces and Capricorn emotionally, mentally and sexually? Read on…

Pisces and Capricorn in love might have a relationship that will develop slowly. They both might not see the growth of the relationship. However it will be stronger the longer they are together. The fish and the goat can work together and they can be content with each other. They might argue if the Capricorn personality is too controlling for Pisces’ sensitive nature.

The Pisces personality will need to understand that is goat’s nature and they are not attacking them. They might not like the goat being stubborn. However, they are patient and understanding. Because of this, they can tolerate their stubborn nature. Pisces will enjoy indulging Capricorn man or Capricorn woman. They will want domestic bliss. The goat needs a home that is neat and tidy and has material things.

Pisces is a Mutable sign. The fish will jump from one thing to the next based on their feeling. They will be very flexible. Because of this, they might be very interested in the goat’s projects.

Capricorn is a Cardinal sign. The goat will typically focus on one project at a time. They will need to let the fish have fun with a lot of things at one time. They will need to know it is not personal if the Pisces born becomes bored with something they are focused on. The goat will stick with the fish’s projects even after they have moved on to start something new. In this Pisces Capricorn friendship the fish can show the goat that being flexible is better than having a strong determination to do things one way. 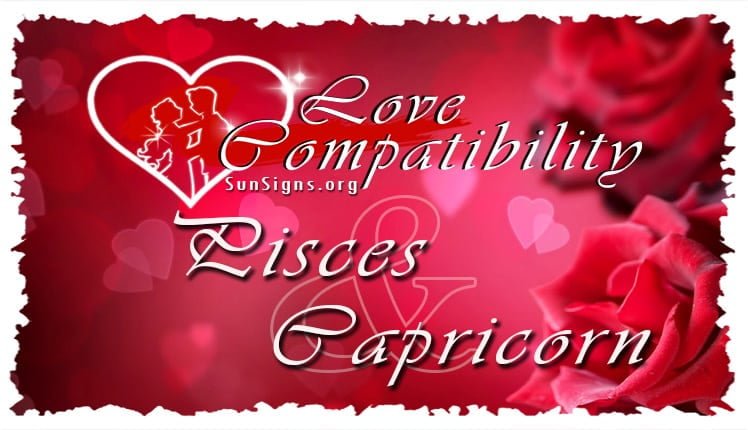 The best thing about the Pisces and Capricorn love compatibility in a romantic relationship is their unique mix of temperaments. They will both enjoy sharing their lives with someone else. They will both like to help each other accomplish their goals. They will be very compatible by horoscopes because of their different natures.

If Pisces and Capricorn are in love, they can overcome their differences. The Capricorn man or Capricorn woman is emotionally cool. However, they will not be immune to Cupid. The Pisces and Capricorn relationship can be successful if they are in love. They will definitely have things in common. They will both be warm and loving. However the goat might need to warm up. They have a sense of duty. The fish will be willing to make sacrifices. They can do a lot of good in the world they live in together.

When the Pisces is dating the Capricorn, they are attracted to each other. The Pisces sun sign has a gentle and romantic nature that will bring out the more protective instinct of the sea goat. Capricorn star sign will have motivation and determination to help ground the fish when they feel like their emotions might be too much. If they want to be together, they can definitely be together. At the same time, the fish and the goat will have a zodiac compatibility that will not be easy.

The planets Jupiter and Neptune will rule over Pisces and the planet Saturn will rule over Capricorn. Saturn will be concerned with dedication, authority and responsibility. Jupiter will be concerned with higher learning, ethics, and standards. Neptune will influence the Piscean’s view of dreams and illusions. The three planets will complement each other. They have a good sense of compassion, justice, and dedication together.

Pisces is a Water sign. Capricorn is an Earth sign. Earth signs are concerned with possessions. Pisces and Capricorn soul mates like to have material things that show their sophistication surround them. The Water sign will depend on emotion and intuition. Because of this, Pisces will be the force of fuel behind the Pisces Capricorn relationship in bed but in a passive way. They will both love a comfortable but elegant home life. This Pisces Capricorn compatibility will have motivation to work for a higher ground.

Pisces and Capricorn relationship will seem to have a positive love compatibility on the surface. However, in a relationship they might not be as good in practice as they are in theory. Pisces is a water sign and Capricorn is an earth sign. The two elements work together in the natural world. However, the fish and the goat might end up with more of a mud puddle in their relationship than a beautiful waterfall from a mountain.

Capricorn is the mythological sage of the zodiac. They are wise and have a lifetime’s experience. They want to guide other people through their knowledge. Pisces is the mythological dreamer of the zodiac. They will be ethereal and romantic. They live in a dream world or a fantasy world or a world of escape. They are as far from reality as they can get. They will not want to go to reality.

The goat will be annoyed with how elusive the fish is. Capricorn will not like that the Pisces male or Pisces female does not care about the wisdom they can give them. The fish will think that the goat is too realistic and rational. They will not like how the goat lacks imagination and thinks material things are important. Pisces and Capricorn love compatibility could find it hard to reach each other. Because of this, they could be less compatible.

Pisces and Capricorn marriage can have more insight in the trouble they might have when they look at their ruling planets. The planet Saturn is about responsibility and realism and will rule over Capricorn. They will give the goat wake up calls and feelings of duty on a regular basis. The planet Neptune is about illusion, escapism, and being vague and will rule over Pisces. The influence of Neptune will be what makes the fish hard to learn about. This might make it hard for Piscean to accept responsibility. Pisces and Capricorn breakup happens because they are less compatible because of these differences.

However, if they are in love, then they might be able to have a successful relationship. In a loving Pisces Capricorn relationship they will communicate with each other and will be less likely to be depressed or try to escape from each other.