You are a Capricorn if you were born between December 22nd – January 19th. The Capricorn man personality is ambitious and a hard worker to boot. He is likely to keep on task when he is working towards something. He won’t want to be distracted by anything or anybody.

The Capricorn man traits shows that while he may seem quiet and contented on the outside, his brain is likely to be in overdrive, always thinking about what he needs to do next to get farther in life. Every once in a while he may show how he is feeling on his outside.

But for the most part the Capricorn male will want to keep his business to himself. He believes that keeping a stoic outside will better help him to get what he needs to do done. Without interference of emotional conflicts he thinks that he can better accomplish the tasks at hand. 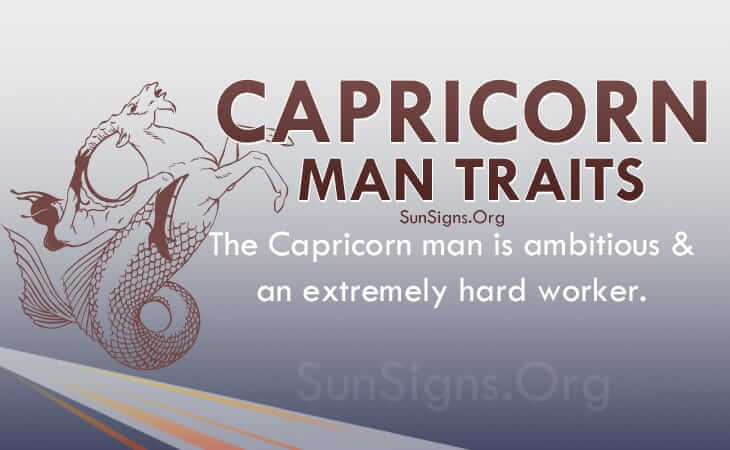 A Capricorn guy wants to keep things in his life simple and practical. He is not likely to spend his money on frivolous things. A younger Capricorn boy in school is not likely to join a club or team unless he thinks that it will help to advance him in his skills or knowledge.

The Capricorn personality traits show that he is not likely to join something just for fun. He would rather the activity to have a purpose to it. While the Capricorn man tries to be patient when it comes to most things, he simply doesn’t have the time to waste with activities that won’t benefit to his life.

The Capricorn is also rather realistic when it comes to just about everything. he understands that it is not likely that he will become a millionaire or an astronaut. He will likely aim for a practical career that he knows will be able to provide him enough money to live off of without any problems.

The Capricorn characteristics show his expectations for making new friends or obtaining a partner are also lower than some of the other zodiac signs. The Capricorn man realizes that it is not likely that he will hook up with a supermodel, instead he is more likely to look for someone who can be a good mother to his children.

If a Capricorn man has an internal conflict of his own, he is likely to try to deal with it on his own. He won’t want to bother anyone else with his feelings unless he thinks that they can truly be of some help.

Because of this the Capricorn man doesn’t share his feelings very often. When he is in a bad mood, whether angry or sad, he will act like he hasn’t gotten any feelings at all.

The Capricorn man trait shows he thinks that taking this stance is better for himself and others. Unless someone knows him rather well and knows that he does this on purpose, then it actually does help the Capricorn man’s poor feelings avoid attention. At the most, others will simply think that he is distracted.

The Capricorn man personality will do whatever he can to get to the top of whatever career or hobby he is pursuing. If this means annoying some other people along the way, or playing some dirty tricks then he’ll do it.

Of course, it is rare that a Capricorn man is willing to do something unethical to get to the top. He would rather do it by fair means, such as working hard and keeping on good terms with his bosses and coworkers.

The Capricorn man characteristics show it is not likely that he will wander much from his strict and focused stance as he works his way up the ladder. He is not likely to take a break until he accomplishes his goal.

When it comes to romance, the Capricorn man personalty traits  show he wants to be with someone who he can count on. He will want an honest and loyal partner who can depend on. He wants a stable relationship without much drama or other conflict.

When it comes to sex, he won’t want to try many new things. He would rather things in bed be more routine like the rest of his life.