You are a Capricorn if you were born between December 23rd and January 20th. The Capricorn personality likes to do things on his or her own. They feel more confident in their abilities to get something done than they feel about working with others.

A Capricorn man or woman knows that they are capable of, and they won’t let anyone tell them otherwise. Because of this they will get projects at work and in school done quickly, but also efficiently. They will feel uncomfortable in group projects and will want to take the lead so that they know that things are getting done correctly. 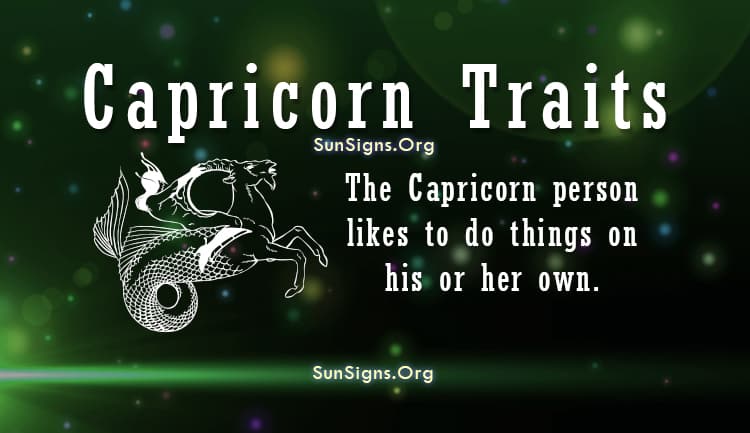 The Capricorn traits show they make a great friend. Extremely helpful and caring, a Capricorn will do whatever they can to make a sad friend feel better. A Capricorn personality can put away his or her own feelings while they are helping a friend.

In this scenario their friends feelings are simply put above theirs. Capricorn will not go back to thinking of themselves as a main priority until their friend is contented. However, Capricorn doesn’t really like to share his or her troubles with their friends.

The Capricorn characteristics show they would rather deal with their problems on their own, rather than bogging down a friend. Their friends will not see it this way. They will want to help Capricorn male or female in most cases, but a Capricorn will almost always reject help unless they know that they really need it.

The Capricorn personality traits show they are a natural-born leader. Capricorn can’t picture himself or herself having a meager job. Capricorn wants to be able to climb the business ladder to one of the higher rungs so that they can be in charge.

The Sea Goat is extremely ambitious and will stop at nothing to accomplish their goals. This may get in the way of the Capricorn’s social life, as well as their personal time for entertainment, but it will all be worth it once Capricorn has reached his or her ultimate goal.

Capricorn personality traits show they are generally seen as slightly boring individuals because they are so goal-oriented. They will put entertainment and free-time to the side at times when they feel like there is something more important that they should be doing.

While they do get side-tracked sometimes, it is rare that they will quit on a project. Capricorn’s also try to not let their emotions get the better of them. This way their life can seem simpler and more in balance.

Their friends or partner may find this personality trait to be annoying at times, but the Capricorn does not really care what others think about his or her emotional disposition.

The Capricorn birthday characteristics show they tend to over-think many simple things that then turn into problems. Since a Capricorn wants total control over their own life, they are bound to think too much about the aspects of their life.

This can cause them to lose sight of themselves. Because they are not into loving themselves, a Capricorn needs somebody to love them. Capricorn personality still do well on their own, but having the extra support can make a big difference at times.

People under Capricorn star sign will fall for someone who can keep them entertained and in a good mood. The Capricorn characteristics show they just want someone to accept them for who they are, rather than trying to pry at them and more or less figure them out or mold them into what they want Capricorn to be.

If Capricorn’s partner cannot learn to accept them, then the relationship won’t last very long. Capricorn will want a loyal partner before they start making love. Once they do start they will want to keep things simple. They won’t want to try a new scenery, but instead improve upon their natural skills in the bedroom.