How good or bad is the love compatibility between a Pisces and Scorpio emotionally, mentally and sexually? Read on…

The Pisces and Scorpio love compatibility in a romantic relationship will have a lot of respect and understanding for each other. The fish and the scorpion have the same element. They are both Water signs. They will have a lot of insight into each other’s hearts and minds. The Scorpio star sign will be very profound and secretive. They will usually be focused on their own secret plans. The Pisces sun sign is idealistic and will look for the undertones in a situation. The fish will withdraw into their own mind. They can forgive the scorpion for being mysterious or withdrawn on their own.

Pisces and Scorpio soul mates are both intuitive. They are both attentive to the subtleties of human interaction. Scorpio can help the fish accomplish their dreams and motivations. They will be able to give the relationship a stable foundation to revolve around. The fish can help the scorpion make their dreams a reality. They are more ephemeral and intuitive. They will easily get tangled up with the scorpion.

The planets Jupiter and Neptune will rule over Pisces sun sign. The planets Mars and Pluto will rule over Scorpio zodiac sign. Mars is the ancient god of war. Scorpio will be living proof of the aggressive, brave, daring, and somewhat belligerent influence. When Pluto mixes with Mars, it will represent new beginnings. Scorpio can take it, but they will definitely give it. Pisces will be ruled by which represents philosophy, expansion and influence.

The influence of Neptune will make the Pisces men and Pisces women dreamy by nature and give them a love of popular culture and media. They have a dreamy and ethereal nature. They will soften the Scorpion’s rough edges. The power of the four planets will make a balanced relationship. 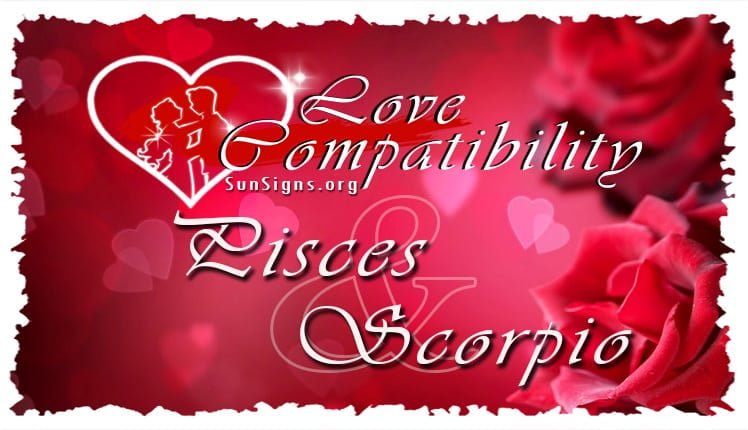 The best thing about Pisces and Scorpio love compatibility is that they both have comparable emotional natures. They are both sensitive to the undertones of life and to the ethereal magic of love. The relationship has a lot of balance and satisfaction. Pisces and Scorpio soul mates are both empathetic. They will both look for genuine profound commitments. They will have a strong bond and a successful relationship.

Pisces dating Scorpio will be magical. Scorpio has potent sorcery. Pisces has subtle fantasy. The fish and the scorpion have a zodiac compatibility that has more magic and allure than any other zodiac relationship.

Pisces and Scorpio in bed will understand each other on an intimate level. They are both water signs and they are two of the most emotional signs in the zodiac. They both know what it is like to be overwhelmed by feelings. Their sexual relationship will be very strong on intuition. The relationship will be based on common emotional strengths and can be very intense.

Pisces zodiac sign is one of the most romantic signs of the zodiac. Scorpio star sign is one of the most passionate signs of the zodiac. They will have an immediate physical attraction to each other. The Pisces and Scorpio sexually will have a magnetic attraction to each other. They will both have highs and lows in their attitudes.

Because of this, the Pisces Scorpio relationship might not have a middle ground. The fish and the scorpion could be happy and passionately in love with each other. At the same time, they could be engaged in an epic, spiteful and damaging war. They will go from one extreme to the other. They will be more compatible because they have the same way of reacting to the world.

Pisces and Scorpio compatibility will make an unbeatable and atmospheric relationship at home. They will have a certain degree of mystical, hard to pinpoint spirituality. Pisces is gentle and the mythological dreamer of the zodiac. Scorpio is the mythological sorcerer of the zodiac. The dreamer can bring softens and kindness to the rougher edges of the sorcerer. Scorpio will give strength and stability to the Pisces male or Pisces female.

Pisces is a mutable sign and can learn to focus on their goals and motivations. Scorpio is a fixed sign and will be the one thing the fish will be able to depend on. They will fit in very well with each other’s wishes and decisions. This couple will be more compatible because the Scorpion likes to lead and the fish will like to follow.

In this Pisces Scorpio compatibility, the Scorpion will like to control everything. They will want to keep their partners close. Pisces can be elusive and hard to settle down. If the scorpion is too jealous, the fish can feel restricted. They have a problem holding on too tight. The fish might find it hard to tolerate the Scorpio’s darker side.

Pisces and Scorpio are both Water signs. They will be compatible because water is a physical and tangible thing. The fish and the scorpion will both appreciate this characteristic and use it to their advantage. Pisces is meant to bring people together. Scorpio sexuality is intense and stubborn. When the traits mix there will not be a stronger connection. Scorpio has an absolute view on life. There is no grey area for them. Everything is either black or white. This might create some problems in the Pisces Scorpio marriage.

Pisces is patient and they will open up the world to Scorpio. They will let them see the overall picture rather than just the small details. They might see their partner as being self centered and insensitive to their emotional needs. Scorpio might become tired of the fish lacking stability. The fish and the scorpion will easily be able to look for and find a compromise.

Pisces is a Mutable sign. Scorpio is a Fixed sign. The scorpion will put their energy into one thing at a time. They will need to give the fish the independence to enjoy their own personal interests. The fish likes to jump from one thing to the next depending on their feelings. They will fit easily into Scorpio’s life and pass times.

The Pisces born can teach the Scorpio man or Scorpio woman that being flexible can be fun and exciting. The scorpion will be able to learn that they can find a compromise without a big fight. In this Pisces and Scorpio friendship each will feed off of each other’s energy. They can have a powerful and emotionally content relationship.

The Pisces Scorpio compatibility will have emotional intrigue and drama. They will have a genuine celestial connection. The scorpion will need to let their cherished fish swim around somewhat. The fish is sensitive and will feel restricted by too many demands which might end in a Pisces Scorpio breakup.