You would be a Capricorn woman personality if you were born between December 22nd and January 20th, depending on the year, as the dates sometimes vary slightly. The Capricorn woman is very stable.

The Capricorn women of the world can vary greatly when it comes to their looks, cultures, hobbies, and careers. All these Capricorn zodiac traits are more or less superficial.

Although the Capricorn females are often different from each other on the outside, they are alike in the way they think and feel about many topics. 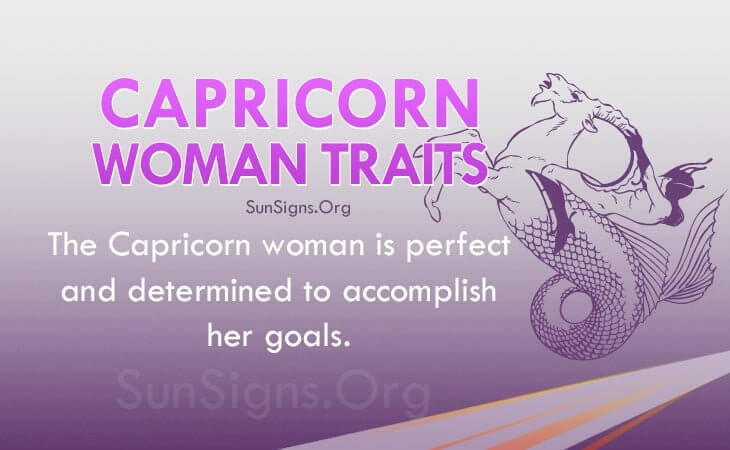 The Capricorn woman personality traits show she is determined to accomplish whatever goal that she has in mind at the time. Once she has a goal, she won’t easily give it up without giving it her best shot.

Her hardworking nature can help her to do anything that she sets her mind to. She is very well suited for jobs that let her have independence or power. The perfect job for a Capricorn woman is one where she is the boss of others or a job where she is her boss. She has the mind to lead others to success, as well as herself.

The Capricorn female is not afraid to suck up to her boss to get more promotions than her coworkers. She will do whatever it takes to get to the top of the career ladder. The Capricorn characteristics show she is confident in her abilities to lead her coworkers into the right direction. There is little that can lower her self-confidence levels.

Once she is a friend, she will be loyal and caring. She will be like a second mother to whoever she is close friends with. She will want to make sure that they are feeling okay, and when they are not, she will do whatever she can to help them out.

The Capricorn lady likes to act as though she is perfect when she is around others who she is not close to. She will act like a princess in the movies, carefully watching everything that she does to seem like she knows what she is doing.

The Capricorn woman traits show that she also cares about her friends’ professional success, and she will do what she can to help them out with that as well. In her younger years, it is likely that she tutored her friends in school.

However, once they start getting along with someone then they will act warmer towards them, and it will easier to be friends from that point on.

The Capricorn woman traits show she is intelligent, and she usually does know how she should act, but when she doesn’t, she may take on an act of becoming silent and staying out of other people’s way so that she does not cause problems.

She tries her best not to bother anyone, and if someone is bothered by her, then she is not likely to take it well. While the Capricorn woman is confident in herself, her self-confidence breaks down when someone doesn’t approve of her. This is why she tries so hard to be perfect in every way that she knows how.

The Capricorn woman personality will want to have more control over the important aspects of the relationship. However, if her partner is as equally smart and responsible as she is then she will be willing to share the decision-making with her partner.

A Sea Goat lady will not give up her career to be a stay-at-home mother, but it is likely that she will still want children. This is why she will want to have a dependable partner with traditional home values. If the Capricorn woman falls in love, then she will be loyal and loving throughout the relationship. She is one woman you should have by your side.