It’s not easy for the earthy Capricorn to connect with the watery Pisces, for neither zodiac sign is particularly outgoing. If they do meet, they will most likely be introduced by mutual friends or find themselves at the same business conference. Once they start talking, the Capricorn woman will discover his kind heart and intuitive qualities.

His emotional depth is extensive, and the Pisces man can often read people easily. But she does not give up information that easily, and presents a challenge for him. She is extremely cautious when meeting new people, but he is patient enough to understand.

The Capricorn female appreciates that about him, and realizes he is as careful as she is. This is where the initial attraction comes from, and he eases into her slower comfort zone. The Capricorn Pisces relationship will develop gradually, but once they both make up their minds they will move things into the bedroom.

This is where he will find out more about his lover, for while the Capricorn female enjoys the simple physical act of sex he experiences it on an emotional level. The Pisces male can anticipate her desires and he tries to incorporate them into a dream world he builds for the two of them.

The Pisces man comes up with great ideas and she has the ability to help see them through to the end. Together, they can create their own perfect world. 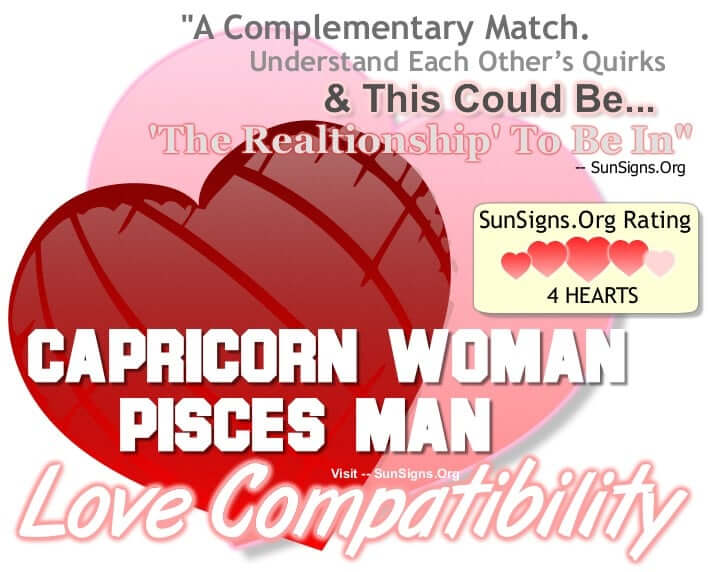 The Capricorn woman is not interested in anything besides the outward pleasure, making it difficult for the Pisces male to include her in his fantasy. He will have to get his head out of the clouds and back on earth with her if he wants to keep her interested.

And she will have to find herself more in the moment to connect with him. He will put plenty of effort into keeping her happy, and her detached manner may be a turn off to him. So the Capricorn woman will have to work just as hard between the sheets as she does in her career to maintain a satisfying sexual union.

And this is the theme for the rest of their partnership, for the Capricorn is steady and ambitious and he is soft and fluid. He can go with the flow while she has goals and knows her path to achieve them. She will want to control everything about their relationship, and the Pisces man will be okay with some dominance.

Pisces men not as good with money as she is, so he will have no problem with her paying the bills and taking care of household responsibilities. But he needs to have a comfortable home life, and Capricorn women don’t pay as much attention to those details. So the Capricorn and Pisces sun signs need to cover different issues in that regard.

But the Capricorn woman is so fixated on her career that he may feel left out at times, and she will have to be aware of harming his sensitive nature. At the same time, the Pisces man will have to realize that her cool exterior is only a façade and she is truly dedicated to him and only him.