Mars in the 6th house indicates that it is time to become delighted for the good work that you have been doing in life. Actually, people see the results of your hard work, and they are willing to follow your steps. Thus, you have to understand that people are willing to do what is good for their lives by taking every step that you take because they see greatness in you.

Moreover, Mars in the 6th house luck describes the things that you have to do in life in order to become successful. Besides, appreciating others’ good work can be something crucial in your life because you want great things to happen in your life.

Mars in the 6th House of the Natal Chart

What does Mars in the 6th house mean? These people are perfect in whatever they do. Actually, perfection is obtained by your consistency and the urge to keep doing good for your life. Furthermore, every desire you have will act as the energy that will keep pushing you forward.

Working hard comes naturally to those with Mars in the 6th house, and you settle for nothing less than perfection. All of your energy and enthusiasm goes into getting things right, whether or not you work alone or with a team. While your direction is true, your standards are tough. Besides, you have to raise your living standards as do something great for your future.

Your attention to detail is unmatched, and this makes you good at any job. You are disciplined, organized, and thoughtful, and you rarely disappoint people with your work. You are so meticulous that people are often in awe of your work ethic. But this is also why you don’t take constructive criticism well. Even if it’s a slight variation that someone else sees as trivial, you take it as an insult to your entire project and all your efforts. 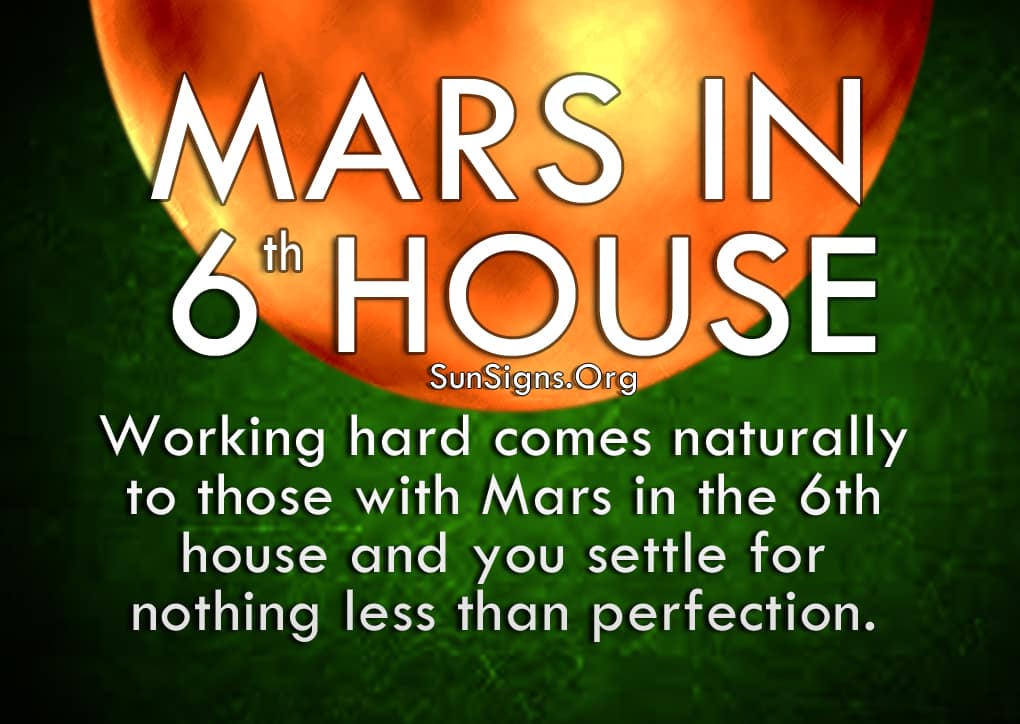 The relationship will suggest that you should try to be less demanding on those around you, friends and family included. Your ideas for perfection do not often gel with other people’s ideas. And, you need to be able to compromise sometimes to get things done.

This doesn’t mean you have to compromise on the final result. It simply means there are different ways of achieving the same goal. Keep an open mind when others offer input. Virgo being your ruling star sign, you can’t stop being a perfectionist.

Mars in the 6th House Charisma

You may learn a thing or two from those who have a different area of expertise than yours. In this way, you will gain more respect and loyalty. And people will work harder for you if they know how much you appreciate their efforts. Just like you enjoy the praise, so do they. This will create a better working environment and also build a healthy home life as well.

While you are capable of working in a team, you would rather be in the lead role or working independently. Your standards are so high it’s almost impossible for other people to live up to them. Besides, teamwork is the only solution that will bring greatness to everyone in the community.

Is Mars in the 6th House Good or Bad?

This is true for your loved ones as well, who often get frustrated when you try to “help” them become better people. Usually, they are unaware of the shortcomings you want to fix. (Read about relationship pitfalls you can avoid).

But you don’t see it that way. You are simply trying to improve upon someone’s method to make them more efficient or tap into what you see as underutilized potential. You are also very impatient, which makes working with others a challenge. If you feel they aren’t moving at your speed, then you see them as procrastinating or even being lazy. Knowing the Virgo man or Virgo woman personality will help you understand this better.

Mars in the 6th House Wealth

Because you take things so personally, you believe other people are taking away your ability to get the job done efficiently and perfectly. Often people are not aware of your frustration, though, because you don’t voice your opinions effectively. You tend to come off as bossy or arrogant, and that’s when people stop listening.

Be sure to share the praise and acknowledge the efforts of those who helped. And don’t easily dismiss when others offer their help in the first place. When you can work closely with others and get things done, it is a satisfying feeling for everyone involved. There will be less stress on you, less stress on them, and more enjoyment all around.

The Mars in 6th house personality also tends to want most of the credit for a project because of all the hard work and dedication you gave to it. This can leave the rest of the group feeling used or under-appreciated. More so, you should feel better about yourself because you have done the right thing. Also, the hard work that everyone sees has brought many changes in the community at large. So, you should continue doing good for your future and for the people around you.