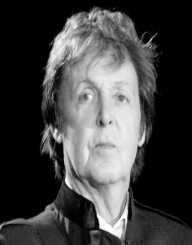 Sir James Paul McCartney was born on June 18, 1942, in Liverpool, England. His mother was a midwife, and his father was a volunteer firefighter during World War II. He has two younger siblings. McCartney attended the Stockton Wood Road Primary school. In 1953, he passed a 11-Plus exam and got accepted to Liverpool Institute. On a bus to the school, he met George Harrison, who later became The Beatles guitarist. The two quickly became friends.

In 1956, McCartney’s mother died of a lung embolism. It was a great loss to 14-year-old McCartney and later became a common point of connection with John Lennon, whose mother died when he was 17. Besides being a volunteer firefighter, McCartney’s father was a trumpet player and pianist. He led the Jim Mac’s Jazz Band in 1920’s. He encouraged Paul to take piano lessons, but he learned to play by ear. His father also gave him a trumpet, but since he wanted to be able to sing while playing an instrument, he traded it for acoustic guitar. McCartney wrote his first song “I Lost My Little Girl” on his Zenith guitar.

Rise Of The Beatles

In 1957 McCartney met John Lennon and his band the Quarrymen. The band played rock and roll and popular music with jazz and blues influences. McCartney was soon invited to join as a rhythm guitarist. By 1960, the group was also joined by Stuart Sutcliffe and George Harrison and after long thought adopted the name The Beatles.

The band soon became a regular performer at the Liverpool’s Cavern Club. Their concerts were often attended by more than 500 people in the 200-person club. Their popularity rose, and the band was offered to play in Hamburg, where they spent the next three years. Bass guitarist Sutcliffe fell in love with a German girl Astrid Kirchherr, who was an artist. She helped to create The Beatles look and had a major influence on their wardrobe and style. Sutcliffe left the band and moved in with Astrid, which finally allowed McCartney to take over the bass.

While in Hamburg, the band recorded their first tracks and was noticed by music columnist Brian Epstein. He saw The Beatles perform and offered to manage them. Epstein made the final touches to the band’s stage look and performance and worked to get a record deal for them. George Martin of the EMI soon signed them, but the band was asked to replace their drummer. After some discussions, the band settled on Ringo Star, which was at the time popular for his work on Rory Storm and the Hurricanes.

After thy were signed, The Beatles popularity grew in a major speed. They had a major impact on the pop culture in the 60’s, sometimes referred to as “Beatlemania.” The band’s debut in America and major success is still known in music history as the “British Invasion.” The band was popularizing their worldviews on peace, love and rock ‘n’ roll.

McCartney was the most productive in producing hit singles, including “Hey Jude,” “Let It Be” and “Yesterday.” During eight years, starting from 962, the band released 12 studio albums. They toured until 1966 until their last concert in Candlestick Park in San Francisco. The noise from hysterical fans was so loud that they couldn’t hear themselves.

In 1970, due to various financial and artistic disagreements, The Beatles disbanded, which broke not only the hearts of their fans but also themselves. McCartney was suffering from depression and drank excessively. His wife helped him to recover and suggested starting a solo career.

In 1970, McCartney released his first solo album McCartney. The critic's reviews were very mixed, but the public loved the album. McCartney formed a band Wings. The band was successful throughout the 1970’s.

In 1980, McCartney was arrested for possession of marijuana in Japan and was imprisoned for nine days. After years of feuding, McCartney finally had reconciled with John Lennon, but the same year, Lennon was killed outside his apartment in New York. After this tragedy, McCartney stopped touring but continued to record. He came back to the stage only in 1989, launching his world tour.

In 1994, McCartney worked together with his former bandmates Ringo Starr and George Harrison on a project The Beatles Anthology. They released the album in 1997. He continued to tour as a solo performer.

In 2012, McCartney released his album Kisses in the Bottom. The same year, he performed together with Bruce Springsteen at London’s Hyde Park, and also performed some of The Beatles hits. McCartney also headlined the 2013 Bonnaroo Music & Arts Festival in Tennessee and released his album New. His latest album was the 2016 Pure McCartney.

As of 2015, McCartney has been established as the UK’s wealthiest musician, with estimated 730-million-pound fortune.

McCartney has been a vegetarian since 1975. He and his wife Linda became outspoken animal rights activists. His wife Linda was a music fan and became a famous rock group photographer. She met the Beatles in 1966, but she met Paul in 1967 concert. The couple married in 1969, and she became McCartney’s muse for the next 30 years. The couple had four children, Heather from Linda’s previous relationship, Mary, Stella, and James. In 1988, Linda died of breast cancer.

In 2002, McCartney married Heather Mills and had a child together. The couple divorced in 2008. His third marriage was to Nancy Shavell. The couple dated from 2007 and got married in 2011.