Moreover, mars in the seventh house luck explain the reason why you are getting opportunities in life. Seemingly, you are the reason why your community is growing every time and it is becoming consistent. Equally, it is time to do good for yourself and respect the people around you because they will push you to the position you are longing for.

Mars in the 7th House of the Natal Chart

What does Mars in the 7th house mean? You like to have a challenging life with something new at every turn. Besides, life can be challenging when you experience something new because it is something new. On the other hand, you have to become someone hard core so that you will resist the things happening in your life.

You certainly have incredible energy with Mars in the 7th house, which can be a good thing or a bad thing depending on where you direct your efforts. You have trouble sitting still and can get a lot done during the day. But you can also be a bit scatterbrained. Mostly, your actions can either create something good in your life or can also lead you to trouble. So, it is time to be watchful of your actions.

With the need to constantly be on the go, you struggle with accomplishing tasks and wanting to move on to the next thing before that happens. You have trouble following through on anything because of this restless energy, which can get you into trouble at work.

It’s better if you’re on a team with other people who can pick up the slack when needed. While you’re quick on your feet and come up with good ideas on the fly, you’re not the greatest at completing these ideas. 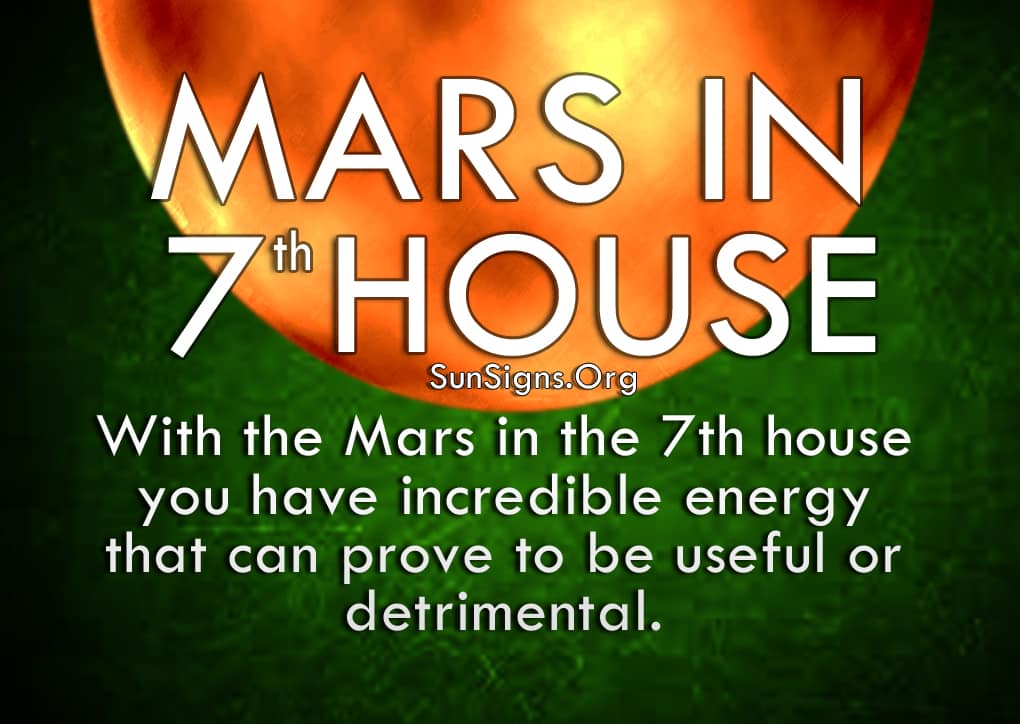 Actually, every prediction that is bringing in people with the right expertise to help you accomplish your goals is the best thing you can do to get ahead in your career and life. You surround yourself with a reliable social circle to take care of those pesky responsibilities that you hate dealing with. You’re too busy extracting everything you can out of life.

Besides, Mars in 7th house women will respect every decision they get from her husband because she knows that they are second in command. On the other hand, Mars in the 7th house man has the authority to drive his family to a better position because that is his major role. Equally, when everyone understands their role, then everything will go as planned and with perfection.

This is true of your romantic relationships as well. Because of your fiery nature, thanks to Mars planet, you need someone who can keep up with you and challenge you. You love debating and enjoy a fruitful argument, as long as it keeps things moving between the two of you. Besides, everything that is challenging you is good because it will teach you new experiences.

But this also brings out a more aggressive side of Mars in seventh house personality. And that can cause problems if you are constantly hashing out a problem of some kind. You need to learn to appreciate the calmer, less chaotic moments of the relationship, and your life in general. It’s not bad to slow down once in a while and appreciate everything you have in a peaceful light.

The rush and excitement can only last so long before it becomes too much for your partner to bear. Stop running everywhere and don’t look for an argument every time you feel restless. Allow yourself to enjoy those little moments that you wouldn’t have even noticed unless you were sitting somewhere, enjoying the quiet. Your partner will love you even more for it. (Get your free Mars Venus compatibility reading).

Is Mars in 7th House Good or Bad?

Be careful not to stir the pot too much or else you won’t have anyone around to help you anymore. Not everything revolves around you. Although, you can be rather arrogant if someone challenges that notion. Try doing something for someone else that offers nothing but a good feeling for you.

And if someone starts an argument with you, try listening to their point of view first before jumping in and playing devil’s advocate. You may surprise yourself and find that you have more in common with this person than you realized.

Open up your mind and allow someone to try and change your worldview. You don’t have to compromise your beliefs, but you may find an intriguing opportunity awaits that you would never have found otherwise. Equally, how you see things can be different from how others see things.

The effect of Mars in the 7th house in your astrology chart is that it will also teach you the art of compromise. While you tend to thrive on conflict, it can have unintended consequences if you continuously pick a fight. Your loved ones may not be able to keep up with your level of discontent, or may not want to, and this can lead to feelings of resentment or regret.