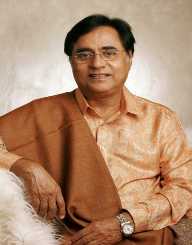 Jagjit Singh was born on February 8th, 1941. He is a famous Indian singer who earned the nickname for being the ‘Ghazal King.’ During the 1970s and 1980s, Singh alongside his wife earned nationwide fame through their songs. In 2003, the Indian government honored him with the Padma Bhushan award. Later in 2014, the Indian government honored his contribution to the society by having a postal stamp with his name.

Jagjit Singh went for his early education at Khalsa High School. After this, he went to Government College before joining DAV College situated in Jalandhar. It is from this institution that he earned his arts degree. He continued with his post-graduate studies at the Kurukshetra University located in Haryana.

His father who strongly supported he noticed his talent in music. Singh was inspired to learn from some of the best Indian musicians such as Ustad Jamaal Khan and Pandit Chaganlal Sharma.

In March 1965, Singh migrated to Bombay without his family’s knowledge. He knew very well that the Bollywood industry presented many singing opportunities for artists. This motivated him to move to Bombay. At first, he landed on singing roles on ad jingles before taking on film roles as a playback singer.

Two years after moving to Bombay, Singh was still struggling to make ends meet. Around this time, he met Chitra Dutta, a young woman born in Bengali. The two fell in love with each other Dutta divorced her husband. After that, she wedded Singh in late 1969. Shortly after, they welcomed their first born son named Vivek. Later on, the couple performed a song that only earned them high acclaim in 1976. This was the year when they released their album called The Unforgettable.

To their surprise, the album performed well and therefore was an immense success in their singing career. Earlier on, a challenge that they faced was that Muslim artists mainly commanded ghazal music from Pakistan.

The Unforgettable marked the couple’s debut Long Playing (LP) record that brought profound success to their music career. One of the main songs on the album was the "Baat Niklegi." This song became an anthem all over India.
Other recordings that came during the 1970s were the likes of Birha da Sultan – 1978, Live in Concert at Wembley – 1979 and Come Alive also in 1979. Other successful albums that came in during the 1980s were Ecstasies – 1984, A Sound Affair – 1985 and Passions – 1987.

Tragedy struck in Singh’s family as his son died in a road accident in 1990. Singh was only 20 years old. Accordingly, his parents, Jagjit Singh and Chitra Dutta left music for one year. Following the death of Vivek, Chitra retired from music hence Singh had to take on a solo career from the 90s.

Jagjit Singh passed away on October 10th, 2011. This was after he suffered a brain hemorrhage in September that year. He went for a coma lasting two weeks before his death at Lilavati Hospital in Mumbai. Singh was 70 years old when he passed away.