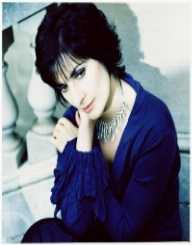 Enya is an Irish singer who was christened Eithne Ní Bhraonáin at birth. She was born in the western precincts of Donegal in Republic of Ireland on the 17th day of May 1961. Her family was one populated by musicians, and she grew up among her eight siblings. Enya’s dialect is Garlic as this is the predominant language in her region of nativity, but she speaks English fluently and well enough.Enya's father was the owner of Leo’s Tavern when she was growing up while her mother worked at the district school as a music teacher.

Enya's uncles also had a band named “An Clan As Dobhar,” which performed Irish music in the local festivals in Ireland. Her older brothers also joined up as members of the band.

However, as the years went on, Enya's brothers changed the name of their group to Clannad. In the year 1973, Enya's sister became a member of the band as well. She was named Maire Brennand. They were able to churn out a couple of albums.

1n the year 1980, it was Enya’s turn to become a member of the family band, and she was a backup vocalist. Also, Enya played the keyboard. She was credited in the group’s album which was released in 1982 and titled “Fuaim.”
The family band decided to replace the manager in the year 1982, and this was also the time that Enya decided to move with him. Enya started living with Nicky Ryan and his wife, –Roma. Enya clung to the belief that she had talents which needed to be nurtured.

Enya decided to nurture her skills at the background, and the fruits began to show in 1985 when a renowned film producer gave her a commission. Enya was asked to script music by David Puttnam for the film, “The Frog Prince.” This film was released in the same year, and credit was given to Enya as “Enya Ni Bhraonain.” This became the beginning of the Enya act officially.


The Path Of Success

A year after working with Puttnam, Enya got the lead from BBC to work on the historical perspective and influences that undergird the Celt lifestyle. She was contracted to script and perform the soundtrack for the series. The Celts made it to the big screen in the year 1987, and Enya got widespread acclaim when the series’ soundtracks and feature songs were made into an album and released. Having got some exposure from her BBC feature, Enya caught the attention of Rob Dickins in 1987, and he signed her on to WEA Music UK. He obliged that the “Enya” compilation album entranced him. Rob made Enya’s work more evident when in 1988; she released the album “watermark” under the same label. “Orinoco Flow” was released as a single from the album, and it became a number hit in many countries.

Enya bent of creativity continued to charm many as she released the album, “Shepherd Moons” as a next step. She followed up with a third album that was titled "The Celts."

Enya is commonly referred to as an Irish new age musician, and she has four Grammy Awards to her name. Also, she scored a nomination for the Academy Awards for her soundtracks. The World Music Awards honored her in 2006 as the Best-Selling Irish Musician on the global scale. When James Horner was contracted to score for the 1997 movie, Titanic, it was because Enya did not reach a deal with the Director. In the final essence, the final soundtrack was yet an Enya influenced work. Enya is a tri-personal entity that revolves around her producer, Roma and herself. Roma is the lyricist, Nicky does the production and Enya is the embodiment. The name Enya is officially recognized as a trademark and is copyright protected.

Enya's original song "Boadicea” caught the eye of Mario Winans as well as the Fugees. This was for their respective songs “I Don't Want To Know” and "Ready or Not." A Distinctive Enya comes with a distinctive as her music style is such that gets overlaid with vocals in such an intermingled fashion. Some contain tunes that count up to 500, and this perhaps underscores while Enya is never seen on performing tours or concerts. Enya is mostly unseen outside of her music and is never under the social radar. Her lyrics too are not a lead to turn to find clues about her life.

Pope John Paul II comes in as one of her big fans while he reigned at the Vatican. Enya is thought to have sung for him at the Vatican. Enya got into the American earshot when after the 9/11 catastrophe, her song, "Only Time" was played and given massive airplay. This was how she ignited American interest in her works. Enya has only been seen performing during a 1992 episode of The Tonight Show with Jay Leno and at the 74th Annual Academy Awards. At other times, she just lip-syncs her songs.

The scale of Enya's music makes it virtually impossible to recreate or replicate for any audience. The sheer logistics of getting her music recreated will sure be a humongous nightmare except for some celestial genius.

Enya has no relationships that are visible apart from been ensconced with her producer and Roma. She is reported to have said; she does not need a man.