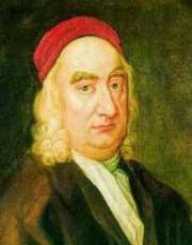 Jonathan Swift was a famous Anglo-Irish satirist, political pamphleteer, poet, and essayist. Born on November 30, 1667, he was also a cleric and served as the Dean of St Patrick’s Cathedral, Dublin. Best known for the Horatian and Juvenalian style, Jonathan Swift did works like A Tale of a Tub, An Argument Against Abolishing Christianity, Gulliver’s Travel and A Modest Proposal. The Encyclopaedia Britannica regards him as a leading prose satirist in the English language. Swift wrote under the pennames like Isaac Bickerstaff, Drappiers Letters as MB Drapier and Lemuel Gulliver.

Jonathan Swift had his education at the Kilkenny College. In 1682, Jonathan Swift enrolled at the Dublin University, then “Trinity College, Dublin” where Jonathan Swift graduated with a B.A in 1686. While there he made friend with William Congreve. The Gracious Revolution in Ireland interrupted with his studies for a master’s degree and further forced him to leave for England in 1688.

While in England, Jonathan Swift gained employment with Sir William Temple as secretary and personal assistant at Moor Park, Farnham with the help of his mother. Sir Temple who was a retired English diplomat also introduced Swift to William III. Jonathan Swift gained the trust of Temple that, he shared matters of great importance with him. Due to ill health, he returned to Ireland in 1690 and returned a year after.

In 1692, Jonathan Swift graduated from Hart Hall, Oxford with an M.A. After his graduation, he became an ordained priest in the Church of Ireland gaining an appointment to the prebend of Kilroot in the Diocese of Connor in 1694. Due to the feel of being isolated, he left his post in 1696 returning to England to work with Temple at Moor Park, a position he held until Temple’s death. With his position,

Jonathan Swift helped prepare memoirs and correspondence of Temple for publication. Swift continued to edit Temple’s memoir even after his death on January 27, 1699. Jonathan Swift hopes that doing this would gain him the needed recognition and help him secure a position in England but that never happened. His work during this period rather earned him enmity from Temple’s family and friend especially with his sister Lady Giffard who was opposed to the indiscretions Swift had included in the memoirs.

Jonathan Swift then consulted King William for the available post, but that also failed. With this, he was forced to accept a position as secretary and chaplain to the Earl of Berkeley, a Lord Justice of Ireland. Unfortunately, upon reaching Ireland, Jonathan Swift found out the job has been allotted to someone else. He, therefore, gained a position in St Patrick’s Cathedral, Dublin as the prebend of Dunlavin and living of Laracor, Agher, and Rathbeggan. Swift political pamphlet, A Discourse on the Contests and Dissentions in Athens and Rome was anonymously published in 1701.

Jonathan Swift studied at the Trinity College, Dublin and received a Doctor of Divinity degree in 1702.

Jonathan Swift published the satire The Battle of the Books, in 1704, as a response to critics of Temple’s “Essay upon Ancient and Modern Learning.” The same year, he came out with A Tale of a Tub and these two publications carved a niche for him as a good writer. It further gained his friendship with John Arbuthnot, Alexander Pope, and John Gay, which would lead to the formation of the Martinus Scriblerus Club in 1713. Being political at this time, Jonathan Swift was appointed an editor of The Examiner during the Tory administration. This led to the publishing of his political pamphlet The Conduct of the Allies in 1711.

Jonathan Swift used the publication to criticise the Whig government for its failure to end the war with France. The Tory government however secretly negotiated with the French to end the War of the Spanish Succession through the Treaty of Utrecht in 1713. Swift’s closeness to the Tory government made him a member of the inner circle of that government. Through this, he served as a mediator between the Secretary of State for Foreign Affairs, Henry St John (Viscount Bolingbroke) and the Lord Treasurer and Prime Minister, Robert Harley.

Jonathan Swift compiled his experience during this time to his friend, Esther Johnson (referred to as Stella by Swift), which was published as A Journal to Stella after he died. Esther Johnson is believed to have been involved with Jonathan Swift Romantically. Swift also had a relationship with Esther Vabhomrigh who he called “Venessa,” who was one of the daughters of the Vabhomrigh family whom he friended in London. Jonathan Swift featured Esther in his poem Cadenus and Venessa.

After the fall of the Tory government and the Whig took over, Jonathan Swift left England for Ireland in somewhat a virtual exile. While in Ireland, Jonathan Swift used his pamphleteering skills to support the cause of Ireland. It was around this time that Jonathan Swift published works like Proposal for Universal Use of Irish Manufacture (1720), Drapier's Letters (1724), and A Modest Proposal (1729). These works gained him the status of an Irish patriot. Nonetheless, the government at the time was not contempt with his status and therefore attempted to silence him. This led to the arrest of subsequent conviction of his printer, Edward Waters, for seditious libel in 1720 for the Swift’s work Drapier’s Letters.

Under the pseudonym, Lemuel Gulliver, first a surgeon, and then a captain of several ships, Jonathan Swift wrote his masterpiece, Travels into Several Remote Nations of the World also known as Gulliver’s Travel first published in November 1726 during his stay in London. This work became an instant hit and was translated into German, Dutch, and French in 1727. He, however, left London back to Ireland upon hearing the news that his friend Esther Johnson was dying. The death of her Esther resulted in his work The Death of Mrs. Johnson in 1728. He wrote his own obituary the Death of Dr. Swift in 1731 but was published in 1739.

The 1730s seemed to be bad for Jonathan Swift, as he also lost his friend John Gay in 1732 and John Arbuthnot followed in 1735. This affected Swift greatly that in 1738 Jonathan Swift also fell ill and believed to have had a stroke in 1742. Jonathan Swift lost the ability to speak properly and showed signs of mental illness. That year he also suffered an inflammation of the left eye and that year ended without him speaking.

Jonathan Swift died on 19 October 1745 close to 80 and was buried beside Esther Johnson according to his wish. After his death, £12,000 of his fortune was used to fund St Patrick’s Hospital for Imbecile, a hospital for mentally ill persons opened in 1757. The hospital still exists and serves its purpose. It is not known whether he had children.