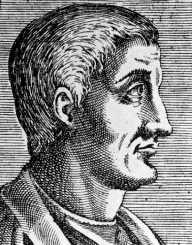 Quintus Horatius Flaccus, better known simply as Horace, was born on December 8, 65 BC, in Venosa, Italy.

Horace was the son of a well-to-do merchant. Because his family had money to spare, he was sent to one of the best schools in Rome: the Grammaticus Orbilius. When he was older, he moved to Athens where he continued studying under various scholars. One of the people whom he studied under was Plato at The Academy. His main topic of study was philosophy.

Around 44 BC, Horace joined the Roman army. He worked his way up the ranks, and eventually became a staff officer. In 42 BC, he fought in the Battle of Philippi. Sadly, his army (led by Brutus) lost to the army of Octavius. Octavius would later become the Emperor of Rome and would become better known as Caesar Augustus. After the war, Horace left the army and returned home.

After returning from the army, Horace made friends with one of the greatest Roman poets of his time: Virgil. He likely learned many tricks of the trade for writing poetry and other forms of literature through him.  Through him, he also met Maecenas, who would go on to more or less sponsor him. It was also likely that Maecenas and Horace also had a romantic relationship, or they were at least extremely close friends. He did not pay Horace to write, but he did gift him a new estate. The estate itself helped Horace to earn enough money so that he did not need to do any other kind of work to make a living. Instead, he could spend his days writing.

One of the first things that Horace wrote were the Epodes, in the mid-30’s BC. These were a set of socio-political poems. In them, he discussed the average life of the Roman people, and what they could do to better their lives. For the next couple of years, he continued to write poetry. It was also around this time that he had begun using satire in his writing, which he likely learned from Virgil. He even published a set of works called Satires around this time.

The next thing he focused on was his Odes. There were three pieces in this series at first. This series of poems, written around 20 BC, were written in a traditional Greek style, which wasn’t extremely common at the time, considering that he still lived in Rome. However, it should be noticed that many Romans, like Horace, borrowed much from the Greek, so many of their stylings in various art forms were similar. The Odes covered mostly the topics of war. Although these writings are famous now, they were not popular at the time they were written. Also in 20 BC, he wrote the first book of Epistles. It would be roughly another five years before he would write the next book in this series.

In 17 BC, Horace was commissioned to write a poem for Caesar Augustus called Carmen Saeculare. It was also in this decade that he wrote the fourth installment in his series of Odes. Somewhere between the end of this decade and the beginning of the next, Horace also wrote one of his most famous pieces: Ars Poetica.