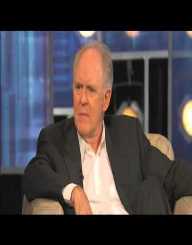 American actor, author, musician, singer, and poet John Arthur Lithgow was born on October 19, 1945, in Rochester, New York, United States of America. Born to an -Dominican family of French, Scottish and English heritage in Puerto Plata, Dominican Republic John’s father Arthur Washington Lithgow III was a theatre director and producer and managed the McCarter Theatre in Princeton, New Jersey as its operational head. His mother Sarah Jane was an actress. John Lithgow had to move around in different places of America during his childhood due to the nature of his father’s work involving the arrangement of local and college theatres and organizing Shakespeare festivals throughout the Midwest of the United States. During one such tour with his father’s production, 6-year-old John made his stage debut.

However, it was not always possible for John Lithgow to be part of his father’s entourage. He spent a considerable amount of time of his childhood years in Yellow Springs, Ohio. He and his other siblings were looked after there by the civil rights activist Coretta Scott King, wife of Martin Luther King, Jr. During his teenage years, he grew up mostly in Akron and Lakewood, Ohio.

John Lithgow attended Harvard University to pursue a course in Graphic Arts as he was passionate to become a fine artist. While studying at Harvard he began participating in student theatre with an equal emphasis on acting, directing and stage designing. His performance in a production of Gilbert and Sullivan's Utopia Limited won the heart of the audience with accolades pouring in from all quarters. Having experienced such adulation from the people who matter, John Lithgow decided to switch over to pursue a career in acting. His graduation in 1967 was followed by two further years of study at the London Academy of Music and Dramatic Art on a Fulbright scholarship.

After his return from London, John Lithgow started working as a director in his father’s theatrical company. He also began acting and directing various plays staged mainly in Connecticut, Pennsylvania, and New Jersey areas. His stage career received the much-needed boost when he debuted on Broadway in David Storey's ‘The Changing Room’. His portrayal of the rugby star Kendall in this play earned him both the Drama Desk and the John Arthur Lithgow Award as Best Featured Actor in a Play. Even before his Broadway debut, he appeared in his first film “Dealing; or, The Berkeley-to-Boston Forty-Brick Lost-Bag Blues”, a 1972 film on the theme of drugs.

His initial success in Broadway was followed by a steady offer of significant stage roles including the likes of ‘My Fat Friend’, ‘A Memory of Two Mondays’, ‘Requiem for a Heavyweight’, ‘Bedroom Farce’, ‘Beyond Therapy’ and ‘M. Butterfly’. He again won a Tony Award in 2002 for Best Leading Actor in a Musical for his performance in the Broadway adaptation of the 1957 film ‘Sweet Smell of Success’. In 2005, his dignified and excellent work on Broadway paved the way for the inclusion of his name into the American Theater Hall of Fame.

After his debut appearance in films in 1972, he played a crucial role in Brian De Palma's 1976 film ‘Obsession’. Again his performance in the 1979 film ‘All That Jazz’, a semi-autobiographical film on the life of Broadway director and choreographer Bob Fosse, was lauded by the critics as well as the general audience. His characterization of a sadistic assassin in the 1981 film ‘Blow Out’ also received generous compliments.

However, his breakthrough film performance came in 1982, when he played the character of a transsexual former football star in the film ‘The World According to Garp’, for which he received an Academy Award nomination. He continued to excel in his film career earning a second Academy Award nomination in 1983 for his portrayal of the character of Sam Burns, a confused, incompetent, troublesome and reluctant banker having an illicit relationship with a married woman in the film 'Terms of Endearment'.

Capitalizing on his red-hot form and his cinematic hot streak, he delivered an unforgettable performance in the “Nightmare at 20,000 Feet” segment of ‘Twilight Zone: The Movie’ (1983), where he played the character of a hysterical Airline passenger who seems to be imagining the presence of a demon in the aircraft. His stupendous success story marched ahead gloriously justifying his capability to act in a diverse range of characters and proving his real worth as a character actor in films like ‘The Adventures of Buckaroo Banzai Across the 8th Dimension!’ (1984), ‘Footloose’ (1984) and the 1993 film ‘Cliffhanger’, where he depicted the character of a British criminal mastermind.

His small screen presence also cannot be ignored. His starring presence in the popular NBC sitcom ‘3rd Rock from the Sun’(1996-2001) earned him the nomination for a Primetime Emmy Award in the category Outstanding Lead Actor in a Comedy Series on all the six seasons of the show. He won the award thrice among these six nominations (1996, 1997, and 1999). John Lithgow earned another Emmy Award in 2009 for Outstanding Guest Actor in a Drama Series for his spine-chilling portrayal of a serial killer in ‘Dexter’, an American crime drama mystery series. He also won a Golden Globe Award for his hair-raising exploits in the series.

Returning his focus once again to the stage, he launched an autobiographical solo stage show titled ‘John Lithgow: Stories by Heart’ in 2008 which was later staged in Broadway Theatre in 2018.

John Lithgow married Jean Taynton, a teacher by profession during the year 1966. The couple was blessed with a son in 1972. However, their marriage ended in divorce in 1980 due to John’s affair with actress Liv Ullmann. In 1981, he married UCLA history professor Dr. Mary Yeager, with whom he has a son and a daughter. His first son Yan born out of his wedlock with his first wife is now an actor as well as a clinical psychologist. His second son Nathan and daughter Phoebe are from his second marriage. Lithgow couple presently shares their time between Los Angeles and New York City.