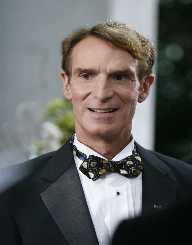 American television personality and science educator Bill Nye was born on November 27, 1955, in Washington, District of Columbia, United States of America. His parents, father Edwin Darby Nye and mother Jacqueline Jenkins-Nye were both veterans of World War II. His mother worked as a codebreaker during the war. His father was with the American army and was involved in building an airstrip on Wake Island, an unorganized, unincorporated enclave of the United States situated in the Western Pacific Ocean, around 2000 miles southeast of Tokyo, Japan. Nye was captured by the Japanese and was made to spend four years in a Japanese Prisoner of War camp without the provision of any electricity and even watches. During these four years, Nye mastered the art of ascertaining the time of the day by observing the pattern of shadow created by a shovel handle. This practice made him an ardent supporter of Sundial, a passion inherited also by his son.

Bill Nye, as he is popularly known to the world, received his elementary education from Lafayette Elementary School and primary education from Alice Deal Junior High School. In 1973, Nye earned a scholarship to study in Sidwell Friends School from where Bill Nye completed his high school graduation. He went on to study mechanical engineering at the Sibley School of Mechanical and Aerospace Engineering, a division of Cornell University situated in Ithaca, a Finger Lakes region of New York. Nye obtained his degree in Mechanical Engineering in 1977.

Upon his graduation from Cornell University, Bill Nye joined Boeing Corporation situated in Seattle and worked there in the capacity of a mechanical engineer. While working with Boeing, Nye designed and manufactured a hydraulic pressure resonance suppressor tube which is used on Boeing 747 airplanes to date. Nye was keen to join the astronaut training program conducted by NASA and applied four times for enrollment. However, to his misfortune, each time his application was declined.

In 1978, Bill Nye happened to win a Steve Martin look-alike contest. His realization of his love affair with making people laugh after winning the contest propelled his career as a Stand Up Comedian. Initially, Bill Nye was working as an engineer during his scheduled day-time office hours working on the serious business of jet navigation and laser gyroscope systems and after taking a short siesta in the evening, Bill Nye performed his stand-up comedy stuff at night. However, encouraged by the response Bill Nye received on his comic acts and visualizing his prospect in pursuing a career as a comedian, Bill Nye left his Boeing job on October 3, 1986.

Upon turning a full-time professional comedian, Bill Nye started his new career as a comedy writer and performer on a local sketch comedy TV show ‘Almost Live!’. After having worked as an assistant to Dr. Emmett Brown on his show ‘Back to the Future: The Animated Series’ from 1991 to 1993, Bill Nye got his first big break in an educational television program titled Bill Nye the Science Guy’ produced by Seattle based PBS KCTS-TV. The hundred episode program was first aired on September 10, 1993, and was concluded on June 20, 1998. Bill Nye’s popularity soared to a new high during the telecast of this show and he was nicknamed ‘Bill Nye the Science Guy’ as a mark of recognition from his admirers. ‘Bill Nye the Science Guy’ won a total of 19 Emmy Awards during its five-year sojourn. Out of these 19, Bill Nye himself won seven for his performance in writing, producing and acting (anchoring). The show was basically aimed to cater to the preteen audience and was often screened in schools as an educational apparatus.

Bill Nye continued his association with science-based shows and worked on different television shows such as ‘The Eyes of Nye’, a science show targeting older audiences and ‘Stuff Happens’, a 2008 television show regarding the impact of our day-to-day activities on our environment aired by Planet Green network. Nye hosted ‘100 Greatest Discoveries’, a show aired by the Discovery channel network as well as ‘Greatest Inventions with Bill Nye’ produced and aired by the same network. His inherited passion for Sundial made him work on a sundial, co-developed by him for the ‘Mars Exploration Rover’ missions which was created keeping the requirement of the astronauts in mind while exploring the planet and was aptly named ‘MarsDial’. In 2005, he was elected as the Vice President of The Planetary Society for a 5-year term. The interest and activities of the society was particularly centered on the planet Mars. Bill Nye also acted as a science teacher in a Disney movie titled ‘The Principal Takes a Holiday’ and in a television crime drama called ‘Numb3rs’.

Bill Nye appeared as a guest artist in several television shows including ‘Who Wants to Be a Millionaire’ and ‘America’s Most Smartest Model’. Bill Nye talked about the topics of global warming and space exploration, one of his favorite subjects on ‘Larry King Live’ and on ‘Forecast Earth’ (formerly The Climate Code) on ‘The Weather’ channel. In 2013, he chose a different type of television reality show and participated as a celebrity contestant in the dance reality show ‘Dancing with the Stars’.

A multi-talented personality, Bill Nye always appears with his trademark bow-tie and lab coat. He was not very successful on his marital front. Nye married musician Blair Tindall on February 3, 2006. Nye annulled his marriage only seven weeks afterward once the marriage license became nullified. In 2007, Nye had to obtain a protective order in 2007 restraining Tindall against trespassing into his house after an incident of house-break, stealing of several valuable items including his laptop. All these crimes were perpetrated by his estranged wife. She also sent some disparaging emails from his laptop impersonating him and harmed his garden by destroying the plants with the use of herbicides. Bill Nye sued Tindall for a compensation amount of $57000 after she flouted the protective order.

Bill Nye’s family has a genetic disorder calls ataxia. It is a neurological disorder involving lack of voluntary coordination of muscle movements. His father, brother, and sister fell victim to this disorder. However, Nye was fortunate enough to remain free from this lifetime fight with balance and coordination of movements encountered by his other family members. His decision to remain childless was a direct consequence of this genetic disorder.