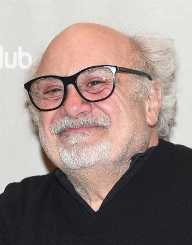 American actor Danny DeVito was born on the 17 November 1944 to Angelo and Julia DeVito.

Danny DeVito was a pupil at the Oratory Preparatory School, Summit, New Jersey. After graduation, he enrolled at the American Academy of Dramatic Arts.

Danny DeVito initially worked at the Eugene O’Neill Theater Center in Waterford, Connecticut but then relocated to New York City where he started to get small roles in off-Broadway productions. DeVito appeared in a 1971 production of One Flew Over the Cuckoo’s Nest and in 1975, he was asked to play the same role in a film version.

DeVito’s breakthrough was when he was offered the role of Louie DePalma in the NBC series Taxi in (1978-1983). He had another career breakthrough when he appeared regarding Endearment (1983) which won five academy awards. His next role was in Romancing the Stone (1984) alongside Kathleen Turner and Michael Douglas. DeVito was also in the sequel The Jewel of the Nile (1985). As a director, DeVito was involved in Throw Momma from the Train (1987) and War of the Roses (1989). Other films include The Rainmaker (1997), Hoffa (1992), Death to Smoochy (2002), Duplex (2003). In 2012 DeVito appeared on the West End in London in The Sunshine Boys. In 2017 he was in The Price.

In 1982 Danny DeVito married Rhea Perlman. They had three children together. The couple separated in 2017.