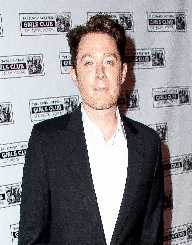 Clay Aiken is an American actor, TV personality, singer, songwriter, author, activist, and politician. He was born on November 30, 1978. He rose to fame when she finished second on American Idol. The achievement allowed him to get a contract offer with RCA Records which recorded his first album "Measure of a Man." Aiken had a sharp growth, and he diversified into other activities including politics. In 2014, he got the Democratic Party nomination ticket for North Carolina in the 2nd congressional district election.

Clay Aiken was born in Raleigh, North Carolina. His parents separated when he was young, and he took his mother's maiden name, Aiken, as his legal name. Clay started singing while still a young boy. He sang in the Raleigh Boychoir. He continued singing and, as a teenager, he sang in different avenues including, church choir, school choirs, and the local theatres.

After high school, Aiken joined a local band "Just By Chance "as a lead singer. He co-hosted and performed with the band at "Just by Chance and Friends" shows in Dunn, North Carolina. He was also worked as an MC and performer at the Johnston Community College Country Showcase in Smithfield.

Clay sang the National Anthem many times during hockey competitions in Carolina. His mother supported his career entirely, and she occasionally bought him gifts after performances.

Clay Aiken released his first album named "Measure of Man" in October 2003. The album performed very well in the American market and sold 3 million copies. It was also ranked number 1 on the Billboard 200. In its first week after release, the album sold 613,000 copies setting a record of the best-selling first album for a solo artist in 10 years. The hit album earned him an American Music Award. His debut single "This is the Night/Bridge over Troubled Water," became Billboard's best-selling single of 2003. The single hit song sold more than 392,000 copies in its first week making a new record.

In November of 2004, Clay Aiken produced his first-holiday album, "Merry Christmas with Love." The album started well by ranking number 1 on Billboard's Top Holiday Albums chart. It was also the biggest debut album in SoundScan history. Aiken also wrote a memoir named "Learning to Sing: Hearing the Music in Your Life." It became a best-selling book in New York. It spent seven weeks on the best-selling book.

In 2006, People magazine readers chose Aiken as their favorite American Idol contestant. He also released two albums during this year “A Thousand Different Ways” and “All is Well.” They both started off in the Billboard Top 5. While working on material for a new album in 2008, Aiken also took on the role of Sir Robin in the Broadway musical Monty Python's Spamalot. His next album, On My Way Here, was released later that year, making Aiken the eighth artist in music history to have their first four albums debut in the Billboard Top 5.

Clay Aiken left RCA shortly after the album was released. His fifth album, The Very Best of Clay Aiken, was released at the end of March 2009 on Sony's Legacy Recordings Playlist Series. Later that year, Aiken signed with Universal Music's Decca Records. He released a new album in 2010, entitled Tried and True. The album was one of Aiken's least successful, with only 50,000 copies being sold in the U.S.

Aiken returned to reality television as a contestant on the fifth season of Donald Trump's Celebrity Apprentice in 2012. He competed against other figures in the media, such as Debbie Gibson, Victoria Gotti, Lou Ferrigno and Aubrey O'Day. Aiken placed second in reality TV yet again, losing to Arsenio Hall in the finale. While competing, Aiken represented the National Inclusion Project.

On February of 2014, Clay Aiken decided that he would be running for Congress in North Carolina as a Democrat. His bid for a seat in Congress was revealed to the public through a YouTube video. He waged a fierce battle for the Democratic nomination against businessman Keith Crisco. The pair faced off in a May primary, which was reportedly too close to call. While the election results were still being determined, Crisco died unexpectedly after being injured in a fall at his home. Aiken suspended his campaign activities after learning of his opponent's death.

After all the votes had been tallied, Clay Aiken emerged the winner by an incredibly slight margin. He had 40.86 percent of the votes compared to Crisco's 39.49 percent. In the general election, the singer went up against Representative Renee Ellmers, a Republican who won the seat in 2010. The region is also mostly conservative, with Mitt Romney has won 58 percent of the North Carolina vote in the 2012 presidential election. Aiken lost to the seat to Ellmers, but he did manage to capture about 41 percent of the vote.

Clay Aiken won the “American Music Award, “Fan’s Choice” category in 2003. In the same year, he won the Billboard Award for “Best-selling Single of 2003. In 2004, he was awarded the “Bill Board Award for producing the best- selling Christmas album. He also won the New Music Weekly Award for the “Top 40 Male Artist of the Year”.

In 2005, he won the American Christian Music Award for the song “Merry Christmas with Love.” In the same year, he won the Robert M. Barg Memorial Award. In 2007, Aiken was awarded the National Centre for Learning Disabilities “Children’s Advocacy Award.” In 2009 he won “The Family Circle Award” from the family equality council.

Clay Aiken surprised fans in 2008 when he confirmed in People magazine interview that he is gay. In August of that year, Aiken announced the arrival of his first child, Parker Foster Aiken. His long-time friend and music producer Jaymes Foster served as the surrogate for the child.