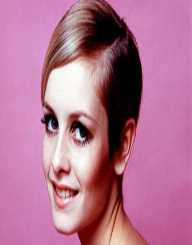 The British model and actress Twiggy was born in Neasden, London, England on the 19 September 1949 into a working-class family. She was the youngest of three girls, having two sisters: Shirley and Vivien.

Twiggy studied at the Brondesbury & Kilburn High School in London.

Considered the world’s supermodel, Twiggy shot to fame as a sixteen-year-old in the mid-1960s and was named The Face of the Sixties by the Daily Express in the UK. She was associated with the British fashion designer Mary Quant who set new trends in women’s clothing during the 1960s.

At 5’6”/167 cm and weighing 51 kg Twiggy was extremely slender, and her androgynous, short-hair (the Twiggy haircut) and false eyelashes set a new trend for models. Her boyfriend, Nigel Davies promoted her early career. Davies became her manager and later changed his name by deed poll to Justin de Villeneuve. He was the person who gave her the nickname Twiggy. Along with other models like Jean Shrimpton and Pattie Boyd, Twiggy became the face of what was known as the Swinging Sixties. She gave up modeling in 1970 to concentrate on a career in acting. Around the same broke up with her boyfriend/manager de Villeneuve, and he stopped managing her career.

Apart from acting, television appearances and modeling, Twiggy has also recorded some albums across a variety of musical genres. Her album Romantically Yours (2011) received good reviews. Her daughter Carly Lawson makes a guest appearance on the album which was produced, James McMillian.

Twiggy is known for her support of animal welfare and has been involved in some organizations and campaigns. She is has been a vocal anti-fur campaigner over the years. She has also been involved with raising funds for breast cancer research.

During the mid-2000s Twiggy teamed up with Marks & Spencer in an advertising campaign that was very successful. She was a guest judge on America's Next Top Model. She has her clothing line which sells on the HSN channel in the United States, and she also has a clothing range available via Marks & Spencer online.

The Daily Express newspaper in the U.K. named her The Face of 1966 and the same year she was voted the British Woman of the Year.

Her early partner was her boyfriend and manager Nigel Davies. She married American actor Michael Witney in 1977, and they had a daughter together. Witney died of a heart attack in 1983.