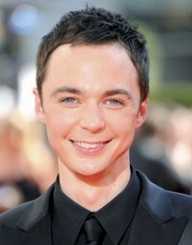 Actor Jim Parsons was born James Joseph Parsons on the 24 March 1973 to Milton Parsons and Judy Ann McKnight. He has a sister Julie. Parsons showed an interest in acting, music, and entertainment from a young age.

Jim Parsons started out working in theatre and television. He appeared on Judging Amy and Ed plus minor roles in a number of films. His breakthrough role was Sheldon Cooper in The Big Bang Theory.

Jim Parsons made his debut in The Big Bang Theory in 2007 playing theoretical physicist Sheldon Cooper. The cast included Johnny Galecki, Simon Helberg and Kunal Nayyar and Mayim Bialik. The sitcom quickly became very popular, and Parsons has won four  Emmy Awards for his role in the Big Bang Theory and Outstanding Lead Actor in a Comedy Series in 2007, 2011, 2013 and 2014.

Jim Parsons received a Hollywood Walk of Fame star in 2015. He has also won numerous awards for his work including the People’s Choice Awards: Favourite TV Comedic Actor and a 2011 Drama Desk Award nomination. He won the Emmy for Outstanding Lead Actor in a Comedy series in 2014. In 2017 he won the Screen Actors Guild Award for Outstanding Performance by a Cast in a Motion Picture for the biographical drama Hidden Figures (2016).

Jim Parsons is in a relationship with Todd Spiewak, and they have been together for over ten years. They divide their time between New York City and Los Angeles.