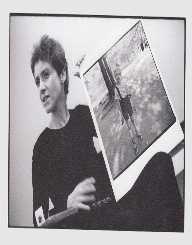 Diane Arbus was born on March 14th, 1923 in New York City in the United States. She stands as one of the most celebrated American photographers during the 20th century. Her photographs mainly depicted strange photos that were in black and white color. Her interest in photography was motivated by her husband Allan Arbus who was an actor by profession. The pair worked together in the fashion industry, and they excelled. Nonetheless, Diane had a special interest in photography and soon decided to change paths. Through her pictures, the New York City was given a strange look, and this is one aspect that made her work quite interesting. In spite of her successful career, Diane committed suicide.

Diane Arbus was given the name Diane Nemerov at the time of her birth on March 14th, 1923. She was born to a Jewish couple named Gertrude Russek and David Nemerov. Her parents were wealthy as they owned a famous departmental store. The advantage that Arbus gained was that she was able to survive the Great Depression without feeling its harsh economic impact. With time, her father retired from his business and worked as a painter. Arbus’s siblings were also talented as her younger sister took the career path of being a designer and a sculptor. On the other hand, her brother later became an English professor at Washington University situated in St. Louis.

Diane Arbus got married when she was still young. She tied the knot with Allan Arbus in 1941. She fell in love with Allan when she was still growing up. Four years later, the couple welcomed their first daughter named Doon. Their second born girl child was born in 1954. The two lovers not only loved each other but they also worked together in their careers. Allan had purchased Diane a camera after having their honeymoon. After some time of working together, Diane began working independently on her passion for photography. Soon, the couple divorced after a decade of separation since 1959. They signed their divorce papers in 1969. Fortunately, the pair maintained their good working relationship as they had two daughters to take care of.

Working with Allan took Diane to the greatest heights in her photography career. Together, they were an admirable team as their thrived in their artistic endeavors. The photographs that Diane took emerged in popular magazines, for example, Vogue. Diane took her career seriously and studied art alongside Lisette Model, a photographer.

While wandering the city of New York with her camera, she began taking strange pictures of people she interacted with. She went to all corners of the city taking raw pictures of her subjects. These pictures were later published in the Esquire magazine in 1960.

Her contributions to the world of photography made her a star in her way. Her fame gave her the opportunity to participate in nationwide shows such as one at the Museum of Modern Art. Along with her successful photography career, she befriended other renowned photographers with the likes of Walker Evans and Richard Avedon.

After her marriage with Allen officially ended in 1969, she entered into another relationship with Marvin Israel. The relationship lasted for about a decade.

Despite the success and fame that Diane Arbus was enjoying during the 60s, she had personal challenges to deal with. The ending of her marriage in 1969 and the fact that she later found out that Marvin Israel had been sleeping with Doon, her daughter, contributed to her depressions. She took her own life in her apartment in New York City on July 26th, 1971. She passed on at the age of 48.