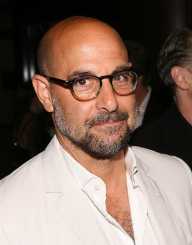 American actor Stanley Tucci was born on the 11 November 1960 in Peekskill, New York to Stanley Tucci Snr. and Joan Tropiano. He is of American-Italian ancestry.

In 1982 Stanley Tucci made his Broadway debut and in 1985, his first film appearance in Prizzi’s Honor.

Stanley Tucci has worked as an actor, writer, director, and producer.