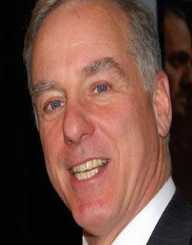 Howard Dean is an American doctor, author, and former politician.

Howard Brush Dean III was born in the town of East Hampton, New York, on November 17, 1948. His father, Howard, was a stockbroker. His mother, Andree, was an art appraiser. He had three younger brothers. His family was quite wealthy.

Howard Dean studied at the Browning School in Manhattan. After that, he attended St. George’s School in Middletown, Rhode Island. He also spent a year at Felsted School in England. In 1971, he obtained a degree in political science from Yale University.

He then studied pre-medicine at Columbia University. In 1978, he got a medical degree from the Albert Einstein College of Medicine. He then began his residency at the University of Vermont.

After finishing his studies, Howard Dean started a medical practice in Shelburne, Vermont. At the same time, he became politically active in his area. He began by leading a campaign to stop the building of apartments near Lake Champlain.

Dean was elected to serve in the Vermont House of Representatives in 1982 and 1984. In 1988 and 1990, he was elected as Lieutenant Governor. Both of his political positions were part-time, so he continued to work as a doctor.

In 1991, the Governor of Vermont suddenly died from a heart attack. Dean quickly took his position. After that, he was elected for two full terms. With his help, the state paid off a great deal of its debt, balanced its budget, and lowered the taxes.

Dean decided to run for President in the 2004 elections. He was a candidate for the Democratic Party. He advocated for better healthcare and fiscal responsibility, and he opposed the war in Iraq. He was the first politician to lead a very active campaign online. His supporters discussed ideas and planned real-life meetings on internet forums.

Because of this, most of the donations to his campaign were small amounts of money which were sent online by his many supporters. Most other politicians only took large sums from a small number of wealthy donors.

At first, Howard Dean's campaign was going well. Still, during the primary elections, he ended up third after his rivals. He gave a speech as a reaction, during which he had a loud outburst.

It ended up being widely publicized. It was broadcast by many news channels, and it was mocked by comedy shows. The next day, he announced he was ending his candidacy.

A few months later, Howard Dean started the group Democracy for America. Its goal was to help Democratic candidates get elected. In 2005, he was chosen as the Chairman of the Democratic National Committee. He developed different strategies that would help other politicians get elected. He also helped improve the fundraising for the Party.

He serves as a contributor for the MSNBC network. He was a guest host on The Rachel Maddow Show and Countdown with Keith Olbermann. He is a Fellow at Hofstra University, and he is on the board of the National Democratic Institute. He is also a consultant for the law firm McKenna, Long and Aldridge.

In 2008, a documentary, called Dean and Me, was released about Dean’s campaign. In 2011, the film The Ides of March came out. It was a political drama based on Dean and his staff. The main roles were played by George Clooney and Ryan Gosling.

In 1981, Howard Dean married Judith Steinberg, a fellow doctor. They opened up a medical practice together. They have two children, Anne and Paul.