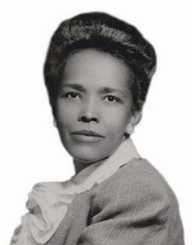 Ella Baker was born on December 18, 1903, in Norfolk, Virginia, USA. Her parents were Georgiana and Blake Baker. She also had three siblings.

As a young adult, Ella Baker attended Shaw University. She was an excellent student. In 1927, she graduated with a bachelor’s degree and with the status of class Valedictorian.

After graduating from college, Ella Baker began working for the Young Negroes’ Cooperative League, an organization which she helped to form.

In the early 1940’s, Ella Baker began working as a secretary for the National Association for the Advancement of Colored People (NAACP). Part of her job was to raise funds for the organization. She worked there for several years before being promoted to the post of National Director of Branches. She would often travel as a part of her job, which is part of the reason why she later resigned from her post and from the NAACP.

After leaving the NAACP, Ella Baker went on to work with other African-American rights organizations, like the New York Urban League. She later resumed working for the NAACP in a smaller chapter of the organization which allowed her to continue her service without traveling as much.

In the late 1950’s, Ella Baker began working for the Southern Christian Leadership Conference (SCLC) with Dr. Martin Luther King Jr. While there; she worked as the organization’s executive director. Baker was in charge of many of the organization’s events and projects. Some of her main concerns while working for this group was to fight against the Jim Crow Laws (laws specially targeted at African-Americans). While there, she also helped to create the Student Nonviolent Coordinating (SNCC) committee. She continued to be active with this group until she left to work full-time for the SNCC in 1960.

While working for the SNCC, Ella Baker worked to create (along with other members of the SNCC) the Mississippi Freedom Democratic Party. This party was an anti-segregation democratic party, which (besides the difference in views on segregation) was much like other democratic parties of the time. During her time with the SNCC, the organization grew exponentially in membership.

During the 1970’s until her death, Ella Baker remained active in civil rights movements in one capacity or another. Some of the organizations she worked with in her later years include the Mass Party Organizing Committee and the Women’s International League for Peace and Freedom.

Ella Baker was honored with the National Coalition of 100 Black Women’s Candace Award in 1984.

The documentary Fundi: The Story of Ella Baker was made in 1981, shortly before her death. The documentary was all about her life as a civil rights protester and the good works she did to fight for equality for African-Americans.

The Ella Baker Center for Human Rights is named after her.

Her likeness was featured on a US postal stamp in 2009.