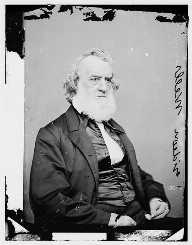 Gideon Welles was born on July 1, 1802. He was a 19th-century journalist and politician. Additionally, he fought hard for human rights. He was also a founding member of Republican Party. Welles also served as U.S. secretary of the Navy under two presidents; Abraham Lincoln and Andrew Johnson.

Gideon Welles was born on July 1, 1802, in Glastonbury, Connecticut. He attended Episcopal Academy and then studied law. During his school days, he had a love for the written words.

Gideon Welles supported ideas of Thomas Jefferson and Andrew Jackson. He was the youngest contestant in 1827 elections. Consequently, he won the general assembly seat in 1827.

Gideon Welles had different political beliefs. For example, he held that people should not follow any religious faith to serve. His actions and reforms lead to many criticisms.

Gideon Welles political career continued to be strong. As a result, President Andrew Jackson appointed him as Connecticut’s postmaster in 1936.  In 1946 president James Polk appointed him as Provision and Clothing chief for the U.S. Navy. In the 1860s he was the leader of the Connecticut Republicans.

President Abraham Lincoln appointed him as the cabinet secretary of the Navy in 1861. He went on to achieve so much in his cabinet position. As a result, his reforms gave a chance for the escaped slaves to join the military.

Gideon Welles had differences with Lincoln’s cabinet members. He was seen as an efficient and leader. Also, he did not always agree with the President.