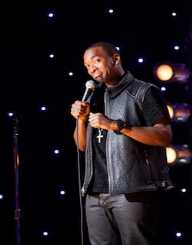 Jared Antonio Farrow is a stand-up comedian and impressionist from the United State America. Born on October 14, 1987, he is also an actor and rapper. Jay Pharoah is best known as a cast for the 36th season of NBC’s Saturday Night Livein 2010. Rolling Stone Magazine ranked him as the 55th greatest Saturday Night Live cast member in 2015. He has impersonated personalities like President Barrack Obama and Jay-Z.

Jay Pharoah was born on October 14, 1987, in Chesapeake, Virginia. He was a twin born prematurely with his brother dying at birth. He developed the talent of impersonation and acting at a very young age. He mentions the character Iago in Disney film Aladdin originally voiced byGilbert Gottfried as his first voice impersonation. Impersonating at the age of six, Pharoah said his father enrolled him in a talent competition, which he placed fifth.

Jay Pharoah started a career in stand-up comedy at age 15 by performing in community theatres and comedy clubs. The young talented comedian and impressionist toured with others like Chris Murphy and Corey Holcomb. His celebrity impressions include Barack Obama, Jay-Z, Eddie Murphy, Will Smith, Denzel Washington and Kanye West among many others. He had a breakthrough through social media after his impersonation of Barack Obama on YouTube went viral. He suddenly became an internet sensation with the video, especially during the 2008 US presidential campaign. He made appearances in series of segments aired on 106 & Park prior to the 2010 BET Awards.

Jay Pharoah gained attention as his impersonation of Barack Obama went viral. With the new popularity, he joined the 36th season of Saturday Night Live in 2010 as a featured player. He made a debut on the show on September 25, 2010.

He impersonated the likes of Barack Obama, Lil Wayne, Kendrick Lamar, Tracy Morgan, Michael Strahan, Chris Tucker, and Chris Rock among others. On September 15, 2012, he made a debut impersonation of Barack Obama on Saturday Night Live during the 38th season premiere. This was after succeeding Fred Armisen who played that character. This did not die out without controversies as some suggested that he may be the son of Obama. He left the show in 2016 with fellow cast member Taran Killam.

Aside from his comedy and impressionist career, Jay Pharoah has featured in several films. In 2012, he played a minor role in the independent film, Lola Versus, 2012 by Fox Searching Pictures. His next role was in the film Ride Along, 2014, starring Kelvin Hart and Ice Cube.