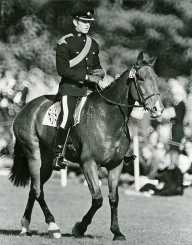 Mark Anthony Peter Phillips was born 22nd September 1948, to Major Peter Phillips and his wife, Anne. He was born in Tetbury, Gloucestershire, in England,United Kingdom.

Phillips studied at Marlborough College, and then went to the Royal Military Academy at Sandhurst.

In March 1978, Phillips retired from the army, although he continued to use his rank, and was known as Captain Mark Phillips.

Phillips remains a well-established member of the British equestrian scene. He is known as a course designer for equestrian events, and Phillips also writes on a regular basis for Horse & Hound magazine.

Among his honors are the following:

In 1973, Phillips married Princess Anne, daughter of Queen Elizabeth II and Prince Phillip. The couple met on the equestrian circuit. They had two children, a son, Peter, and a daughter, Zara. The couple divorced in 1992.

In 1985, from the result of an extramarital affair, Phillips had a daughter, Felicity, with Heather Tonkin, a teacher from New Zealand.

In 1997, Phillips married Sandy Pflueger, a dressage rider from the United States. The couple have a daughter, Stephanie. In 2012 the couple separated.