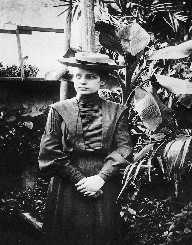 Physicist Lise Meitner was born on the 7 November 1878 into a Jewish family in Vienna, Austria. Meitner was the third of eight children of Hedwig Skovran and Philipp Meitner.

In 1901 Lise Meitner enrolled to do a physics degree at the University of Vienna and studied under Ludwig Boltzmann, obtaining her Ph.D. in 1906.

Once Lise Meitner obtained her doctorate, she moved to Berlin where she worked under Otto Hahn and Max Planck at the Kaiser Wilhelm Institute for Chemistry.

Researching radioactivity with Otto Hahn, the pair discovered the element protactinium in 1918. In 1923 Lise Meitner worked on the radiationless transition, later called the Auger effect and named after the French scientist Pierre Auger who discovered the fact in 1925.

Due to political upheaval in Europe in the late 1930s, Meitner moved to Sweden where she continued her research at Manne Siegbahn Institute. She kept a low profile and was also subject to some hostility because of her gender. Because of this, she worked quietly with Hahn on research and experiments relating to nuclear fission, keeping a low profile.

In January 1939 the experiments proving evidence relating to nuclear fission were made public. Then in February 1939, Meitner provided the physical explanation for the observations. She also came up with the term atomic fission.

Hahn won the Nobel Prize in Chemistry in 1944 for his research into fission, but Meitner’s role was mostly unacknowledged. In 1966 Meitner was belatedly recognized when the Enrico Fermi Award was given to Meitner, Strassmann, and Hahn.

Lise Meitner spent her later years in Cambridge, England. She died on the 27 October 1968.

Lise Meitner was co-recipient of the Enrico Fermi Award which was awarded posthumously in 1966. The element Meitnerium (Mt) was named after her.