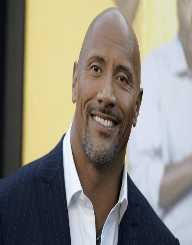 Dwayne Johnson, also known by his ring name The Rock, is an actor, producer, singer, and professional wrestler. He is from a long line of wrestling family

Dwayne Douglas Johnson was born on 2nd of May, 1972 in Hayward, California. His parents are Ata Johnson (born Feagaimaleata Fitisemanu Maivia) and Rocky Johnson (born Wayde Douglas Bowles). He has an older brother and sister: Curtis and Wanda Bowles, from his father’s first marriage.

Due to his father’s wrestling career, the family moved around frequently. Dwayne lived in Auckland with his maternal family, where he attended Richmond Road Primary School, in Grey Lynn. He spent 10th grade at President William McKinley High School in Honolulu, Hawaii.

When his family settled down during 11th grade, Dwayne studied in Freedom High School of Bethlehem, Pennsylvania. He began playing football at in the East Penn Conference. Dwayne was also an active member of the school's track and field and wrestling teams.

He was recruited by Florida and studied at the University of Miami, where he played defensive tackle. He met his wife Dany Garcia there. After Dwayne suffered a back injury, his football dreams were almost over. But he was encouraged to graduate academically by Dany, 1995 he graduated with a degree in criminology.

Dwayne’s injury meant that he was not picked for the NFL draft, but he was offered a contract as a linebacker by the Calgary Stampeders. His career in football was short lived when he was let go in favor of an NFL player two months into the contract. Upon returning to Florida, Dwayne decided to go into wrestling.

In 1996, Dwayne Johnson made his wrestling debut as Rocky Maivia, borrowing his father and grandfather’s ring names. He participated in World Wrestling Federation (WWF) Survivor’s Series, his first opponent was Paul Levesque (Triple H). February of 1997 marked his first WWF championship belt, making him the youngest wrestler to win a belt, at the age of twenty-four. After suffering from a knee injury, he took time off to marry Dany Garcia.

Dwayne Johnson returned to WWF as the Rock, part of Nation Domination, a group of Bad Boy Wrestlers with Faarooq, D'Lo Brown, and the Kama. He was pitted against various characters, creating mock grudges. After the "Nation" split, The Rock joined the "Corporation" and worked towards the persona of "The People’s Champion." His signature right eyebrow lift was named - The People's Eyebrow.

After 2014, Dwayne became a part-time WWE (World Wrestling Entertainment), participant. He still retains his ring name: The Rock. Due to his good looks, Dwayne’s alter ego was famous.

When Johnson published The Rock Says, his first autobiography, the book stayed on the New York Times bestseller list for twenty weeks. His popularity meant that he had opportunities to appear on television, to promote his book and to take on small acting roles.

Dwayne Johnson made several appearances in such as Saturday Night Live, DAG, Star Trek: Voyager, and That '70's Show (as his father). In 2001, Dwayne Johnson was the Scorpion King in The Mummy Returns. He was paid $500,000 for the few minutes of screen time. But it was impressive enough to encourage producers to produce The Scorpion King. The 2002 film was his first step into movie and acting, Dwayne took his role seriously, enlisting the help of an acting coach.

The success of The Scorpion King allowed Dwayne to become a movie star, and credited to reinvigorate old films like G. I. Joe. He is known for action roles with comedy characters. Dwayne Johnson also started his own production company: Seven Bucks Productions. It will produce various film projects in which he will star, including Baywatch and Jumanji, both slated to be released in 2017.

Dwayne also partnered with Under Armour, a fitness apparel manufacturer to release “Project Rock.” The items are sold out frequently. He also released an app as part of “Project Rock.” He also has six discographies to his name, songs he sang during shows and movies.

Dwayne Johnson Rock Foundation was founded in 2006, focusing on at-risk and terminally ill children. In 2007, he and Dany donated $1 million to the University of Miami, to fund the renovation of its football facilities. In gratitude, the University renamed the Hurricanes' locker room in Johnson's honor.

Dwayne Johnson married Dany Garcia on May 3, 1997. Their daughter, Simone Alexandra, was born August 14, 2001. Dwayne and Dany split in 2007, but remain friends. Soon after the divorce, Dwayne began dating Lauren Hashian. Jasmine was born in December 2015.

He is a registered Republican, and appeared as of WWE's "Smackdown Your Vote" campaign in the 2000 Democratic National Convention, to encourage young people to vote.

Dwayne Johnson won eight WWF/ WWE championship, and the World Wrestling Championships twice. He won the Kid’s Choice Award’s Favorite Male Butt Kicker, among other awards he has received in his wrestling and movie career.