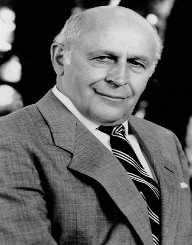 James Britt Donovan was an American lawyer and who became the general counsel of the OSS. Born on February 29, 1916, was also a United States Navy officer in the Office of Scientific Research and Development and international diplomatic negotiator. He is best known for negotiating the exchange of captured Soviet spy Rudolf Abel for the American U-2 pilot Francis Gary Powers from 1960 to 1962. In 1962, Donovan also negotiated the release of 9,703 prisoners captured in Cuba after the failed Bay of Pigs Invasion. He was the subject of the 2015 Oscar-nominated film Bridge of Spies, where Tom Hanks played Donovan.

James B. Donovan was born on February 29, 1916, in the Bronx in the United States of America. He was born to Harriet (née O'Connor) and John J. Donovan. His father was a surgeon and his mother a piano teacher. His brother John J. Donovan Jr. became a New York State Senator. The Donovan family was of Irish descent.

James B. Donovan received education from Catholic All Hallows Institute and enrolled at Fordham University in 1933. He graduated with a Bachelor of Arts degree in English in 1937. Donovan initially aspired to become a journalist, but upon the insistent of his father, he studied law at Harvard Law School in 1937. He earned a Bachelor of Laws degree in 1940.

After earning his law degree, James B. Donovan started his law practice at a private lawyer’s office. During the World War II, he served as a commander in the Navy. This led him to become an associate general counsel at the Office of Scientific Research and Development in 1942. A year later, he became the general counsel at the Office of Strategic Services, serving until 1945. Donovan was involved in the Nuremberg trials in Germany in 1945 as an assistant to Justice Robert H. Jackson and presented the visual evidence of the trial. He became a partner in Watters and Donovan, a New York-based law firm, specialised in insurance law.

James B. Donovan stood in for Soviet spy Rudolf Abel in 1957, despite many layers refusing to defend him. Thomas M. Debevoise later came in to assist him. At the end of the trial, Abel was found guilty, but Donovan managed to convince the court not to sentence him to death. He then appealed the case at the Supreme Court, in the case Abel v. the United States but the appeal was rejected by 5-4 vote. Acting as a lead negotiator, Donovan alongside CIA lawyer Milan C. Miskovsky in 1962, negotiated with Soviet mediators to free US pilot Francis Gary Powers and American student Frederic Pryor in exchange for Rudolf Abel. The negotiation was successful, and the deal is the subject of the film Bridge of Spies, 2015 by Stephen Spielberg.

James B. Donovan provided a pro bono service for the Cuban Families Committee of prisoners’ relatives to negotiate for the freedom of the 1,113 prisoners of the failed Bay of Pigs Invasion. Cuban exile Pérez Cisneros had in 1962, contacted him to act as the negotiator. He again worked with CIA lawyer Milan Miskovsky for the negotiations. The then Cuban leader, Fidel Castro and Donovan reached a deal on December 21, 1962, to release all 1,113 prisoners in exchange for $53 million in food and medicine. By July 3, 1963, he had negotiated for the release of 9,703 people from Cuban detention. He received the Distinguished Intelligence Medal for the works.

James B. Donovan served in various capacities on different boards. He was the vice president of the New York Board of Education from 1961 to 1963 and became the president from 1963 to 1965. In 1962, he unsuccessfully contested for the US Senate in New York on the ticket of the Democratic Party losing to incumbent Republican candidate Jacob K. Javits. Donovan served as the president of Pratt Institue in 1968. His book Strangers on a Bridge: The Case of Colonel Abel and Francis Gary Powers was published in 1964. He followed it with the second book Challenges: Reflections of a Lawyer-at-Large in 1967.

James B. Donovan married Mary E. McKenna in 1941, with whom he had three daughters and a son. The family lived in Brooklyn, New York and had seasonally in residence in New Jersey, Spring Lake and Lake Placid in New York. Donovan died of a heart attack on January 19, 1970, at Methodist Hospital in Brooklyn, New York. He was buried in his Lake Placid resident beside his wife and daughter. His biography Negotiator: The Life and Career of James B. Donovan was released in 2006.