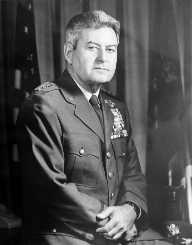 After his university education, Curtis Lemay was in October 1929, commissioned into the United States Air Corps as a second lieutenant. From 1931 to 1932, LeMay received flight training at the Norton Field in Columbia. Curtis Lemay would later on become one of the special trainees in aerial navigation in the Air Corps after been stationed in Hawaii.

Curtis Lemay first served under pilot Commander Caleb V. Haynes on a Boeing B-17 Flying Fortress as a navigator during the search of the battleship Utah which was later bombed by a team of B-17. Though the search was held in a bad weather condition amidst wrong coordinates from the Navy personal, Curtis Lemay helped locate the ship. LeMay gained promotion and added responsibility after navigating for Haynes on the prototype Boeing XB-15 heavy bomber for a flying survey Panama over the Galapagos Islands.

American was in isolation during the World War I but actively partook in the world’s worst war in human history which claimed several lives and permanently caused destruction to vast lands, The World War II. It is through this World War would America announce its military prowess and subsequently rise to become a world superpower. Curtis Lemay had risen from the first lieutenant to major during the US participation in the World War II only after Japan had bombed Pearl Harbor in December 1941. Curtis Lemay was the commander of the 305th Bomb Group a newly established B-17 Flying Fortress unit. His first combat in the war was in October 1942 when as part of the Eight Air Force led his unit to England.

Curtis Lemay led the combat until May 1943, and later that year commanded the 3d Air Division. LeMay took several controversial and dangerous initiatives especially in the Regensburg section during the Schweinfurt-Regensburg mission in which he led 146 B-17s to Regensburg on August 17, 1943. Twenty-four bombers and several veteran crews were lost after bombing Regensburg and some bases in North Africa.

Curtis Lemay led the attacks on 64 Japanese cities including the Operation Meetinghouse “firebombing of Tokyo” on March 9 to 10, 1945. It was described as the single most destructive bombing raid during the war killing 100,000 civilians and destroying 250,000 homes and burning about 16 square miles of the city. Curtis Lemay had previously through the spread of leaflets warned civilians asking them to evacuate to save their lives. It is estimated that between the start of the campaign against Japan to the final surrender of Japan in August 1945, over 500,000 Japanese civilians lost their lives and 5 million being homeless during the firebombing campaign led by LeMay.

Curtis Lemay also superintended the disruption of Japanese shipping and logistics through the aerial mining operations against Japanese waterways also called Operation Starvation. The war was now over, but Curtis Lemay will once again add his name to the books by breaking several aviation records as he piloted one of the three specially modified B-29 from Japan to the U.S in 1945. He broke records of the time like the greatest USAAF takeoff weight, the longest USAAF non-stop flight, and the first ever non-stop Japan to Chicago flight

Post world war Curtis Lemay headed the Strategic Air Command (SAC) in 1948 and was instrumental in several initiatives there. In 1951 Curtis Lemay received his fourth star making him the youngest four-star general and subsequently the longest serving in that rank (from 1948 to 1957) in the history of America.

After retiring from the Army, Curtis Lemay was made the vice presidential candidate of George Wallace of the American Independent Party for 1968 presidential election. Curtis Lemay who had previously turned down the offer due to his support for the Republican candidate Richard Nixon finally agreed with the conviction that if Nixon wins, Curtis Lemay would pursue a conciliatory policy with the Soviet Union and accept nuclear parity. After the election, the Wallace-LeMay ticket had 13.5 percent of the popular votes.

Curtis Lemay was married to Helen Estelle Maitland on June 9, 1934. The couple had a child Patricia Jane LeMay Lodge. Curtis Lemay died on October 1, 1990, at the March Air Force Base in Riverside County, California from a heart attack.