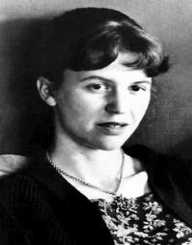 Sylvia Plath was an American novelist, poet, short story writer, and Editor. Sylvia is one of the most known and influential poets of the twentieth century. Some of her best-known works are novel Bell Jar and poetry collections Ariel and The Colossus. More so, she is known to have advanced the field of confessional poetry.

Sylvia Plath was born on October 27, 1932, in Boston. She was born to Otto Plath and Aurelia Schober Plath who are believed to have been of Germany and Austrian decent respectively. Her father Otto Plath worked as an entomologist and a biology professor at Boston University. He died when she was only eight, due to diabetic complications. Sylvia was brought up in 24 prince street Jamaica plain, Massachusetts and Johnsoms avenue in Winthrop Massachusetts.

Sylvia Plath was a creative poet from a young age and found solace in writing, a habit she maintained for the rest of her days. At the age of eight, she came up with her first poem, briefly after losing her father. After that, she wrote a lot more in magazines and newspapers in the preceding years.

Her family relocated to Wellesley, Massachusetts in 1942, where her mother got a job as a lecturer at Boston University. While there, Sylvia enrolled to Bradford senior High school to proceed with her fifth-grade education. Sylvia Plath had her first national paper published an article in the year 1950. It was named `Youth’s appeal for world peace,’ and following that, she had a lot of other articles in the national paper. She completed her high school studies in 1950 and joined Northampton College. This was due to a scholarship, and there, she pursued a degree in English.

Sylvia Plath attended Smiths College in 1950. She was a clever outstanding student and excelled in her studies. At that time, she w onoto rked as an Editor for `Smith Review’ and guest editor at Mademoiselle Magazine when she was in her third year. While working there, the editor arranged a meeting with Welsh Poet Dylan Thomas but did not involve Sylvia in the meeting. She had great admiration for the Poet and wanted to meet him, so that angered and depressed her, inciting some suicidal thoughts in her.

At this time, she was invited to Harvard writing seminar but declined.  She was enrolled for electro conclusive therapy sessions which were meant to help her curb depression. However, this did not change much, and in August 1953, she crawled under her house and took forty of her mother’s sleeping pills in a suicide attempt.

Sylvia Plath survived the attempt and spent the next couple of months in Psychiatric care. There, she received insulin shock and electrical treatments and made quite a good recovery, which enabled her to go back to college. She wrote thesis `The magic mirror’ and graduated in June 1955 from smiths college with highest honors. After this, she was awarded a Faulbright scholarship to a subsidiary of Cambridge University called Newnham College. She maintained her poem writing hobby in Newnham and often wrote poems for the student's newspaper Varsity.

Sylvia Plath returned to the USA in 1957. At that time, she started working on a novel she had tried to write earlier but soon gave up on it. During the same year, Sylvia Plath got employed at her former college, Smiths College as a member of their faculty. The job was, however, more involving, and she had very little time to write, which increased her frustrations and her desire to write declined. She was with her husband Hughes at the time, and in 1958, they relocated to Boston. There, she worked partially as a receptionist at the Psychiatric ward of Massachusetts General Hospital, which was coincidentally the same place she had been treated while she tried to commit suicide.

Around this time, Sylvia’s career had a relatively breakthrough. She had written a couple of poems for example `Mussel Hunter at Rock Harbor’ and `Nocturne.’ These poems got published by a magazine called `The New Yorker.’ At that time, it was a very prestigious magazine, and such publications earned a lot. Despite this, she did not find it easy to write at the time, and this caused more depression problems. In 1959, she began attending writing under the guidance of Robert Lowell. During the same year, she expanded her writing works and was able to print her work in `the spectator’ and `Harper’s among others.

In 1960, she came up with her first book of poems, `The colossus and other poems.’ Sylvia Plath agreed to contract terms with a British Publisher Heinemann to publish the book, leading to its publication on October during that year. Sylvia Plath then began writing an autobiographical novel, called `The bell jar.’ During the next year, she had a miscarriage that led to depression and inspired her to complete the novel and other poems. However, she burnt the only manuscript for `The bell jar’ in 1962 after being upset by her husband who was cheating with another woman. Her separation from her husband during this time frame drove her to writing some of the best poems in her entire career, as some claim. Sylvia began writing various works in Manuscript form that enabled publications, even after she had passed away.

Sylvia Plath published the novel `The bell jar’ in 1963 and began writing another novel `Double exposure.’ However, its manuscript was misplaced, and it could not be published.

Sylvia Plath got married to Ted Hughes on June 16, 1956, while she was still at Smiths College but kept it a secret until she completed her studies. They had two children together, namely Frieda and Nicholas. Frieda became a painter and a poet while Nicholas worked as a specialist in Stream salmonid ecology.

However, Hughes and Sylvia’s relationship hit the rocks in 1962 when Hughes had an affair with another woman. This depressed Sylvia greatly. Through her life, she often had depression problems that often worsened when stressful situations arose.

Sylvia Plath had tried to take her own life for a couple of times. The first instance was in 1953 when she took an overdose of sleeping pills. The second instance was in 1962 when she drove her car into a river but survived the accident.

In 1963, there were adverse climatic conditions that forced Sylvia Plath to her home, with no telephone and limited communication with other people. This led to more depression, constant agitation and suicidal thoughts.

Sylvia Plath tried to consult various psychiatrists, but this hardly changed anything. She finally committed suicide on 11th February 1963 by locking herself in the kitchen, placing her head on the oven, and turning the oven on. This led to carbon monoxide poisoning that caused instant death. Her body was found later that day. She died while 30 years old.