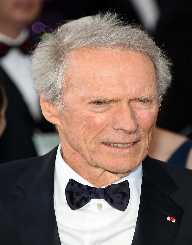 Being born just before the great depression of 1930’s started, Clint Eastwood was witness to his parents struggle to find suitable work and their frequent travel throughout the west coast searching for the same. After a grueling journey, seeking jobs all over California, Eastwood family finally settled in the Bay Area city of Piedmont.

In 1950, at the age of 20, Clint Eastwood was requisitioned for military duty at the Army Special Services. During his military service, he was sent to Fort Ord on the Monterey Peninsula and had to work as a swimming instructor. During this time, he met Hollywood actors David Jansen and Martin Miller. They persuaded him to come to Los Angeles after completion of his military training to have a go at acting.

Accordingly in 1953, after his discharge, Eastwood arrived in Los Angeles working in gas stations and taking classes in the Los Angeles City College for survival. Being tall and handsome he got an opportunity for a screen test with Universal despite having no acting experience. He passed the screen test and signed a contract with Universal. His first two films, ‘Revenge of the Creature’ and ‘Francis in the Navy’ were both released in 1955 featuring him in small, inconsequential roles.

In 1958, Clint Eastwood was auditioned for the role of Rowdy Yates in CBS’ hour-long western series ‘Rawhide.’ He passed the audition and was cast as Rowdy Yates, second in command to Eric Fleming’s trail boss. His portrayal of a hot-headed young cowboy got him the required breakthrough in the industry and earned him loads of accolades. The series ultimately continued for eight seasons topping the T.V. ratings. Eastwood’s character also displayed maturity over the years and took over the role of trail boss towards the end.

In 1960, Eastwood moved to Italy to be a part of a Western trilogy directed by Sergio Leone. He played a distinctive character of a calm and curt man in the film ‘Man with No Name.’ Ironically, Hollywood stalwarts like Charles Bronson and James Coburn refused the offer before Eastwood’s consent.

The first of the trilogy was ‘A Fistful of Dollars’ (1964). It was a remake of Japanese legend Akira Kurosawa's classic ‘Yojimbo.’ The next two were ‘For a Few Dollars More’ (1965) and ‘The Good, the Bad and the Ugly’ (1966). This trio of westerns, nicknamed ‘spaghetti Westerns’ due to their Italian connection, reached out to international viewers gaining steady popularity along the way, catapulting Eastwood firmly to the position of an internationally famous film star.

After his Italian sojourn, Clint Eastwood came back to the United States and started his own film production company ‘Malpaso.’ He rolled out his first film ‘Hang 'Em High’ (1968) as actor-cum-producer. He again appeared as a tough guy cowboy role in this film. He did his directing debut in the 1971 movie ‘Play Misty for Me.’ Both his acting and direction in this film garnered favourable reviews from the people in general as well as critics.

Clint Eastwood's transition to the genre of gritty, violent action movies started with the film ‘Dirty Harry’ in which he played the character of Harry Callahan, a controversial San Francisco cop. The genre proved to be immensely popular with the public and resulted in a series of sequels. ‘Magnum Force’ (1973), ‘The Enforcer’ (1976), ‘Sudden Impact’ (1983) and ‘The Dead Pool’ (1988) were the next four films in the five-film series beginning with ‘Dirty Harry’ (1971).

Clint Eastwood was not satisfied with acting in and producing a similar genre of movies. His ‘Thunderbolt’ and ‘Lightfoot’ in 1974, ‘Every Which Way but Loose’ in 1978 were ample proof of his success in comedic roles. In ‘Escape from Alcatraz’ (1979) he portrayed the character of a real-life convict Frank Lee Morris. It was a serious deviation from his action and comedic film roles and one of his most notable appearances.

In the new millennium, Clint Eastwood continued his journey as actor-director and producer and came up with scintillating movies one after another. His ‘Space Cowboys’ (2000), ‘Mystic River’ (2003), ‘Million Dollar Baby’ (2004), ‘Flags of our Fathers’ (2006), 'Letters from Iwo Jima' (2006), ‘Gran Torino’ (2008) were all highly acclaimed and successful films. They earned him a pocketful of awards and recognition as a revered film personality.

Clint Eastwood received numerous other awards including SAG Award and Lifetime Achievement Award conferred to him by prestigious institutes all over the World.

Clint Eastwood has officially married twice besides having affairs with numerous others. His first wife was Maggie Johnson, whom he married on December 19, 1953. They broke up in 1984. They were blessed with two children. He was in a live-in relationship for 14 years with Sondra Locke. Locke eventually filed a palimony suit against him.

On March 31, 1996, Eastwood married Dina Ruiz. They have a daughter, Morgan Eastwood. They are reportedly living separately after August 2013. Other than his three legitimate children, he has fathered many other children, from his various relationships with different women thus establishing his Casanova image.